Louis Andriessen's Grawemeyer Award–winning film opera La Commedia, a collaboration with director Hal Hartley, is based on Dante's Divine Comedy, with additional texts including the Old Testament's "Song of Songs." This set of the Dutch National Opera production features the Asko | Schönberg Ensembles, led by Reinbert de Leeuw. The Washington Post calls La Commedia "an exciting, powerful and rich piece that shows Andriessen at the top of his game." The Los Angeles Times considers it "the greatest opera of the century so far."

Nonesuch Records releases Louis Andriessen’s Grawemeyer Award–winning La Commedia on June 10, 2014, as a set with two CDs and a DVD. The film opera, a collaboration with director Hal Hartley, is based on Dante’s Divine Comedy, with additional texts from the 16th-century German theologian Sebastian Brant, the 17th-century Dutch dramatist Joost van den Vondel, and the Old Testament’s “Song of Songs.” This Dutch National Opera production features the Asko and Schönberg Ensembles, led by Reinbert de Leeuw, with vocal soloists Claron McFadden (Beatrice), Cristina Zavalloni (Dante), Jeroen Willems (Lucifer/Cacciaguida), and Marcel Beekman (Casella), as well as Synergy Vocals, led by Micaela Haslam. The children’s choral parts are sung by Waterland’s Kinderkoor De Kickers, conducted by Jan Maarten Koeman. Orders of the album on MP3 and FLAC include the audio portion only.

In the composer’s words, “The simultaneous existence of heaven, purgatory, and hell; parallels between various scenes; and the use of film and stage effects all create the complexity that is necessary to do justice to Dante’s greatest creation. To this end, all events portrayed on the film screen and on stage, including dance, the spoken word, and song, should be regarded as a reaction to the music.”

La Commedia premiered in 2008 in Amsterdam before receiving concert performances at Los Angeles’ Disney Hall, New York’s Carnegie Hall, and, most recently, at Washington, DC’s National Gallery this spring as part of a week-long Andriessen 75th birthday festival. The opera has received critical praise along the way, with the New Yorker saying, “Even for a composer who admires both Bach and Chaka Khan, the stylistic frame of reference in La Commedia is staggeringly wide, ranging from Gregorian chant to what might be called Satanic Broadway … Hell and Heaven run together in a wild continuum,” and the New York Times saying, “He has set this deliberately motley text to a driven, often intensely dark score that, like so much of Mr. Andriessen's music, brings together starkly contrasting styles and makes the juxtapositions sound natural. Dissonant, sharp-edged woodwind and brass chords are accompanied by almost minimalist arpeggiation; jazz moves pop out of nowhere and evaporate just as quickly … the score’s most memorable aspect is the pounding, often lurching chord progressions that evoke different corners of the underworld.”

Dutch composer Louis Andriessen’s music has explored politics, time, velocity, matter, and mortality in five works for large ensemble: De Staat (Nonesuch, 1991), De Tijd (Nonesuch, 1993), De Snelheid, De Materie (Nonesuch, 1996), and Trilogy of The Last Day. In addition to La Commedia, his stage works include the operas Writing to Vermeer (Nonesuch, 2006) and Rosa: The Death of a Composer (Nonesuch, 2000), as well as the monodrama Anaïs Nin. Nonesuch also released an album with his De Stijl and M is for Man, Music, Mozart in 1994.

Hal Hartley is an American independent filmmaker (writer, director, producer, and composer) active since 1989. His films include Trust (1990, winner best screenplay Sundance Film Festival), Henry Fool (1998, winner best screenplay Cannes Film Festival), and Meanwhile (2010). He has written and staged his play Soon at the Salzburger Festspiele in Austria (1998) and in America (2001). His association with Louis Andriessen began with the short film The New Math(s) in 1999. Hartley has just completed shooting his 13th feature film, Ned Rifle. He lives in New York.

PRODUCTION CREDITS
Music by Louis Andriessen
Electronic music by Anke Brouwer
Texts by Dante, Vondel, and others, and from the Old Testament 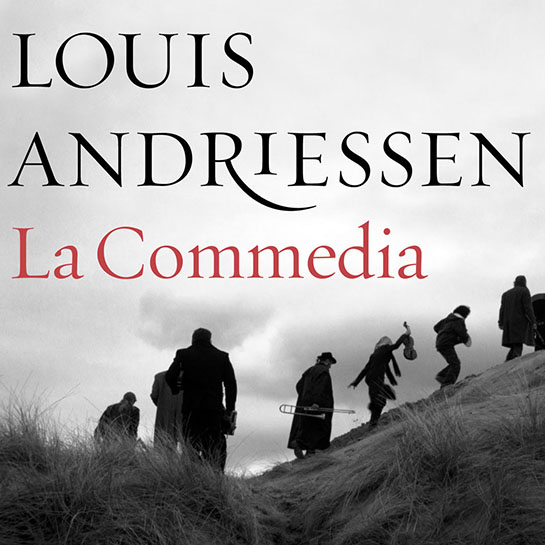