This live two-disc recording documents a historic reunion from the legendary Brazilian musicians Caetano Veloso and Gilberto Gil. Recorded during a concert in Brazil in 2015, Dois Amigos, Um Século de Música: Multishow Live celebrates a lifelong friendship over the half-century careers of two artists who have broken cultural, social, and political barriers through music. The Guardian says: "They are now in their early 70s, and they are still remarkable." Jazzwise calls it "a glorious celebration of Brazilian music, the art of the singer-songwriter, and an enduring friendship." NPR says: "It's almost startling to encounter music like this—refined to an essence, simple, graceful and complete."

Nonesuch releases a live two-disc recording from the legendary, Grammy Award–winning Brazilian singers, songwriters, and guitarists Caetano Veloso and Gilberto Gil—Dois Amigos, Um Século de Música: Multishow Live—on April 8, 2016. This historic reunion celebrates a lifelong friendship over the half-century careers of two artists that have broken cultural, social, and political barriers through music. Dois Amigos, Um Século de Música: Multishow Live was recorded for television during a concert in Brazil last year, in the midst of the Dois Amigos tour. Gil and Veloso have, to date, performed for more than 135,000 fans at 44 sold-out concerts in 21 countries and 35 cities since beginning their tour last June in Amsterdam. Their tour begins again this April, with US stops in Los Angeles, Oakland, Miami, and Brooklyn.

The new album features an entire concert, comprising 28 songs, including "Nine Out of Ten" in English; "Tres Palabras" and "Tonada de Luna Llena" in Spanish; "Come Prima" in Italian. Dois Amigos also includes longtime favorites from the artists, including "Coração Vagabundo," "Desde que o Samba é Samba," "Expresso 2222," "Esotérico," "Drão," and many others. The songs, which are mostly written by Veloso and Gil, are performed acoustically, as both duets and solo.

Reviews of the concerts have noted the intimacy between Veloso's and Gil's voices and guitars, with Reuters calling their Montreux performance "pure and poignant," and the Guardian calling it "historic … a classy and emotional performance," saying, "They are now in their early 70s, and they are still remarkable." Their friendship begin in the early 1960s, in Salvador, Bahia, and has endured many triumphs and difficulties over the decades: from their first, historic concerts at the Teatro Vila Velha to performances in music festivals, moves to Rio de Janeiro and São Paulo, incarceration, and exile to London, among many other experiences.

Dois Amigos was produced by Veloso and Gil, with sound engineering by their sons, Moreno Veloso and Bem Gil. The album was released internationally earlier this year.

Caetano Veloso and Gilberto Gil hold very important roles in developing and keeping Brazilian popular music vibrant and alive around the world. Over 50 years, they have both developed extremely successful careers as singers, composers, writers, and guitarists.

Their importance to the culture of their country goes back to the 1960s, when they together created the Tropicália movement, which combined pop culture with traditional local music. Deeply critical of local politics and morality, Tropicália was eventually repressed by the authoritarian regime. Both Gil and Veloso were imprisoned and exiled.

Gil's albums have been released internationally since 1978, the year of his successful performance at the Montreux Jazz Festival in Switzerland. He tours Europe, North America, Latin America, and Japan every year, with his contagious pop music sung in Brazilian Portuguese. Of his 60 albums, 12 have gone gold and five have been certified platinum; he has won seven Grammys and sold more than four million records.

Veloso has 49 albums and 400 songs in his catalog. He has released more than a dozen albums on Nonesuch Records in the United States, including Tropicália 2 (1994), an album with Gil celebrating 25 years of artistic/personal friendship. He has won two Grammys and 10 Latin Grammy Awards, among other awards.

A Production of Uns Produções, Gege Produções and Multishow

This album is available from Nonesuch Records in the United States only. 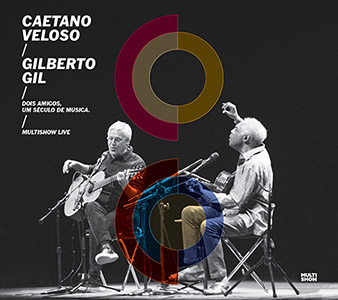