A Few Words in Defense of Our Country / Putin (Vinyl 7")

This vinyl 7-inch single, ready for Inauguration Day 2017, includes two Randy Newman songs: "A Few Words in Defense of Our Country," from the Randy Newman Songbook box set, b/w "Putin," a new song previously released only digitally that went on to win the Grammy Award for Best Arrangement, Instruments and Vocals. The Los Angeles Times called the former a "three-decades-on bookend to 'Political Science'" that was "so funny it hurt."

Randy Newman first presented the lyrics of "A Few Words in Defense of Our Country" as an op-ed piece in the New York Times in January 2007, in response to a State of the Union address by then-President George W. Bush, and included the song on his 2008 album Harps and Angels. The Los Angeles Times called it a "three-decades-on bookend to 'Political Science'" that was "so funny it hurt." Here is his performance of the song from 2007:

Upon the release of "Putin," just prior to this year's presidential election, the New York Times said the song, "featuring a billowy orchestra in razzle-dazzle mode, feels uncannily well timed ... As is often the case in Mr. Newman’s satire, the tone lands somewhere in between scathing and sympathetic, making earnest points amid ridicule." You can watch the video for the song here: 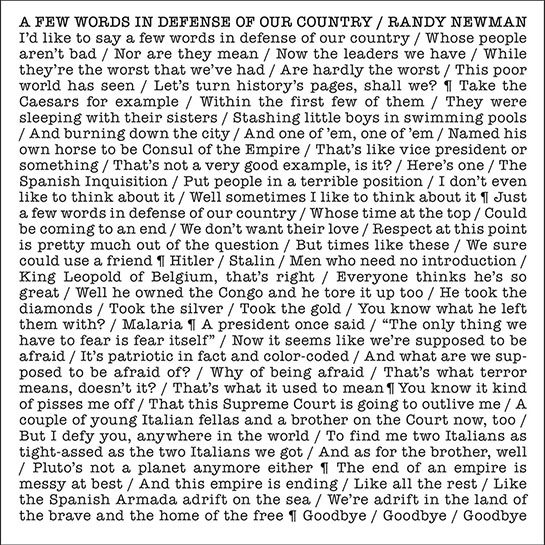