Between 1975 and 1980, Nonesuch released a series of five LPs of pianist Gilbert Kalish performing the rarely recorded Haydn piano sonatas. Now, on the 200th anniversary of the composer's death, the recordings are being reissued, this time as digital albums. Volume V includes the sonatas Hob. XVI: Nos. 45, 30, 27, and 50.

Between 1975 and 1980, Nonesuch Records released a series of five LP recordings of pianist Gilbert Kalish performing piano works—the rarely recorded sonatas and variations—by Joseph Haydn (1732–1809). Now, on the 200th anniversary of the composer's death, the recordings are being issued again for the first time since 1980, this time around as digital albums. Volume V includes the sonatas Hob. XVI: Nos. 45, 30, 27, and 50.

Here, the pianist reveals the story behind and discusses the reaction to the initial recordings:

By 1975, it had become a delightful and well-established tradition for Tracey Sterne, who was then head of Nonesuch Records, to celebrate the conclusion of a recording project by opening a bottle of good cognac and sharing it with the artists and producers in a spirit of relaxed satisfaction. At the time, I had just finished a particularly difficult recording session, at the end of which my collaborator (who shall remain nameless) stormed out without a word to anyone.

Even amidst the turmoil, dear Tracey continued her lovely post-recording tradition, and while we were all at our ease and in a mellow frame of mind, she said the following to me, "Gil, you really deserve a solo recording after what you've been through this week. What would you choose to do if we gave you that opportunity?"

I answered immediately: the Haydn Sonatas. At that time, these were undervalued, mostly unknown works that deserved a hearing (as is the case even today, nearly 35 years later), and there were few if any recordings of any of them. Tracey jumped at the idea, and that conversation led to the recording of a single LP. It was not meant to be a series of recordings, but the reaction to the music was so strong and positive that the project developed a life of its own, and we did five full-length LPs of the Haydn. Only one of these LPs was transferred to CD at the time, and so this digital release, on the 200th anniversary of the composer's death, makes the entire set available once again for the first time in more than three decades.

Below is the liner note from the original album release in 1980:

The four sonatas included in this release span a period in Haydn’s creative life of nearly thirty years. The first was composed in 1766 and was probably intended for the clavichord or harpsichord, while the final work was specifically written for the most modern piano of its time. We can, through these four pieces, trace not only Haydn’s own development but equally the development of the keyboard instrument from the outgoing harpsichord and clavichord to the new fortepiano (as it was then usually called).

The E-flat Sonata No. 29 (XVI:45) survives in autograph and is dated 1766 (British Museum, London), but it was not published for some two decades, at a time when Haydn was finding a market also for his earlier works. Even the greatest of all the pre-London sonatas, No.33 in C minor (1771), was withheld for many years before publication. Our No.29 is in three movements and has a certain jaunty sophistication that has always endeared it to pianists: its fastidious, often only two-part writing, suggests that the composer may have had a clavichord in mind; and the frequent use of an Alberti-bass figure in the first movement—it dominates the entire development section—also hints that the clavichord rather than the harpsichord (on which such figures sound less attractive) was the vehicle Haydn intended for the work. The lean, two-part writing of the attractive A-flat Andante middle movement reminds us that Haydn’s principal precursor in the keyboard style was Carl Philipp Emanuel Bach, whose elegant, personal and ingenious manner was of wide influence on whole period. “Whoever knows my style will see how much I have learned from [C.P.E.] Bach,” Haydn used to say. The most modern and characteristic movement is perhaps the Finale, in Haydn’s favorite meter of 3/4 and with those syncopations of which he is so fond in the music of the late 1760s. Pianists will notice that there are passages of keyboard virtuosity, such as crossing the hands at very short notice, swift interchange of left and right hands to produce a seamless pattern, rapid repeated notes necessitating changing the fingers (3-2-1), and so on. This should recall to us that Haydn’s sonatas were primarily intended for didactic purposes, and probably for his own pupils. In those days, it was customary for the piano teacher to compose pieces especially for his more talented pupils, perhaps exploiting within the piece some technical difficulty that the pupil needed to master. The last bar of this witty and racy Finale is marked Adagio, a piece of mock sentimentality.

Sonatas No. 42 (XVI:27) and 45 (XVI:30), in G and A major, respectively, are part of a series of six keyboard sonatas which Haydn marked, in his own Entwurf-Katalog (Draft Catalogue) as “6 Sonaten von Anno 1776” (Nos. 42–47); but that date represents the final “collecting point,” wince at 1774 (private collection, Basel, Switzerland). The set was published in 1778 by J.J. Hummel of Amsterdam and Berlin, and achieved wide circulation throughout Europe. By 1776, Haydn was firmly dedicated to the newer piano, but no doubt many of the ladies and gentlemen who purchased either manuscript copies of the set that Haydn distributed (several of these exist), or the Hummel edition, played the pieces on their clavichord, spinet or large harpsichord.

We have suggested that these works, “Anno 1776,” represented a collection that Haydn had begun perhaps two (or more?) years earlier. No. 42 is surely a work primarily intended for the student, and indeed, it is one of those that is included in countless albums and in “selected sonatas by the masters.” There is some evidence that it was composed some years earlier than 1776 (it is included in a MS. of Haydn works from the 1760s, now in the Library of the Gesellschaft der Musikfreunde, Vienna). It is in three movements but the middle movement is a menuet and trio. Its earlier date is also suggested by the kind of Alberti-bass writing that we noticed in the sonata of 1766: in just the same way, the Alberti-bass dominates the entire development section of the first movement. The Finale varies a rondo-like theme, which in the event again suggests an earlier date by not developing into a real rondo form but only suggesting its contours.

No. 30 has only two main movements, an opening Allegro and, for a Finale, a “Tempo de Menuet,” which has six variations. One delightful feature of the Allegro is the way in which the piano is made to imitate horn calls—this effect occurs three times within the movement. We said, at the beginning, that there were two movements, but in fact the situation is more complicated. Just at the end of the Allegro, Haydn breaks off, and we are treated to a burst of original thinking: the music changes to adagio and we are all at once in the key of F sharp minor. It sounds as if a whole, soulful slow movement in the key of the “Farewell Symphony” is about to occur, but the unstable harmonic basis of the music suggests a kind of Fantasia. All at once we have a close in E minor (which is preceded by a bass line that skillfully uses the lowest notes of the keyboard as it existed at that time) and the Tempo di Menuet begins. It is a stroke of bold unconventionality.

The final Sonata on this record is one of Haydn’s greatest and most profound. It is one of three composed for a brilliant English pianist, Therese Jansen, who in 1795 married the son, Gaetano, of a famous Italian artist living in London, Francesco Bartolozzi; Haydn was one of the witnesses at the wedding. These three sonatas, the last Haydn ever wrote, are in C, D, and E-flat (Nos. 60–62); they were written with one of the big English grand pianos in mind, and one, moreover, with the so-called “extended keyboard.” Hitherto, the range of the piano had been from F’ (two-and-one-half octaves below middle c) to f’’’, but the new British pianos—Haydn himself owned one, by Longman and Broderip, and took it back to Vienna; it is now owned by the writer of these notes—went up to c’’’’. Haydn wrote music that took into account not only these ‘extra’ notes but also the disposition of the pedals in those English instruments.

The dry, witty opening shows, in its relaxed expansiveness, that this will be a large-scale Allegro. It is interesting to observe how Haydn broadens and “opens” the theme, which begins in tow parts and adds a third only towards the end of the statement. The repetition is made brilliant by the arpeggio chords that so suited the instrument, while the upper line is already varied. One thing leads to another, one thing grows out of another: the main theme continues when Haydn reaches the dominant, but constantly enriched and developed. Despite the rigorous intellectual discipline with which this movement is constructed, the music retains a sparkling freshness that seems to belie its tense motivic development. The actual development section modulates to A-flat Major, where a famous and much discussed passage, marked “open Pedal” with a long wavy line, is introduced. A similar and particularly beautiful section, also marked “open Pedal,” also occurs in the recapitulation. Now not knowing the constitution of Haydn’s English piano, many commentators have been misled by this indication of “open Pedal” to imagine Haydn wanted the sustaining pedal held down during these two passages, but what Haydn had in mind was, of course, the sopra una corda pedal.

The slow movement was already in existence, and had in fact been printed in Artaria in Vienna as a separate entity (June 1794), by the time Haydn began to envisage it as the center of a new sonata. It is a very free, fantasia-type movement, which sounds like an improvisation but is in fact in a kind of sonata form. Haydn added dynamic marks and made other, quite substantial, small changes when using it in the new work.

The Finale is in the kind of German-dance or scherzo form that Haydn liked to use as the finales of his late piano trios. The feeling of a finale is enhanced by the grotesque false cadence at bar 10—as if the music were to go into E: something that would hardly take place in a real scherzo or dance. It has something of the dry humor and heady effervescence of the opening movement.

The first edition of Sonata No. 60 appeared in London about the year 1800, dedicated to Mrs. Bartolozzi, and there is every reason to believe that like No. 62 (which Mrs. Bartolozzi published in 1799, using Haydn’s autograph), Haydn’s former pupil was responsible for the publication. Since the autograph manuscript has disappeared, this first edition, which is very reliable, is of priceless value to us because it probably represents a close transcription of Haydn’s autograph. It is interesting that this work was never published on the Continent during Haydn’s lifetime, possibly because it used the “extended keyboard,” which was not available on Continental pianos until well after 1800. 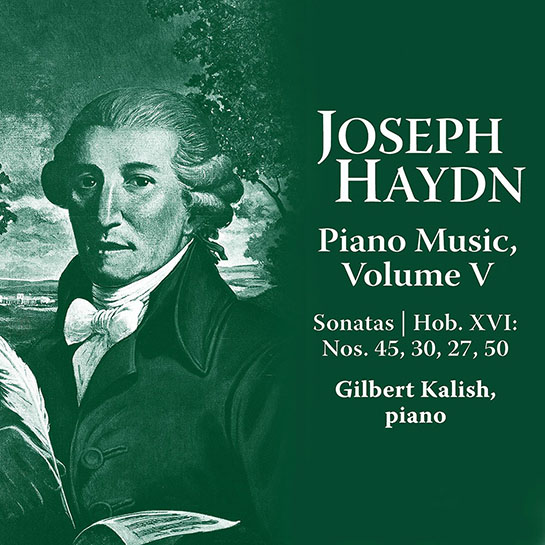