Composer Caroline Shaw wrote Narrow Sea, this album's title piece, for Sō Percussion, Dawn Upshaw, and Gilbert Kalish, who perform it here: five parts, each a new setting of a text from The Sacred Harp, the 19th-century collection of shape-note hymns. Also on the album is Sō Percussion's performance of Shaw's Taxidermy, which she wrote for the ensemble. Grammy Award winner for Best Contemporary Classical Composition.

Nonesuch Records released its second album from Pulitzer Prize–winning composer Caroline Shaw, Narrow Sea, on January 22, 2021. The title piece was written for Sō Percussion, Dawn Upshaw, and Gilbert Kalish in 2017; they perform it on this recording as well. Narrow Sea comprises five parts, each a new setting of a text from The Sacred Harp nineteenth century collection of shape-note hymns. A composition Shaw wrote for Sō Percussion in 2012, Taxidermy, also is on the album.

As Shaw, whose 2019 Nonesuch/New Amsterdam album Orange won a Grammy Award, says: “Narrow Sea combines my previous explorations of folk song and hymnody with a sonic universe that includes ceramic bowls, humming, a piano played like a dulcimer by five people at once, and flower pots (which are the central focus of Taxidermy). Gil Kalish’s piano serves as a grounding force, or a familiar memory, that keeps reappearing amid the different textures introduced by Sō Percussion. And Dawn Upshaw’s voice is a brilliant instrument that brings the words to life with warmth and directness.

“All of the texts used in the piece share two features: each refers to water in some way (the river Jordan, swelling flood, narrow sea—images of what lies between this world and the next), and each has a sense of joy in looking to heaven (crossing over, going home),” she continues. “These words may be hundreds of years old, but the essential yearning for a home, a safe resting place, has a renewed relevance today, throughout the world. The work is dedicated to all humans seeking safe refuge.”

Caroline Shaw is a New York–based musician—vocalist, violinist, composer, and producer—who performs in solo and collaborative projects. She was the youngest recipient of the Pulitzer Prize for Music in 2013 for Partita for 8 Voices, written for the Grammy–winning Roomful of Teeth, of which she is a member. Shaw’s film scores include Erica Fae’s To Keep the Light and Josephine Decker’s Madeline’s Madeline as well as the upcoming short 8th Year of the Emergency by Maureen Towey. Hailed for “astonishing both the pop and classical music worlds” (Guardian), she has produced for Kanye West (The Life of Pablo; Ye) and Nas (NASIR), and has contributed to records by The National, and by Arcade Fire’s Richard Reed Parry. Shaw currently teaches at NYU and is a Creative Associate at The Juilliard School.

With a commitment to the transformative power of music, longtime Nonesuch artist Dawn Upshaw has achieved worldwide celebrity as a singer of opera and concert repertoire ranging from the sacred works of Bach to contemporary pieces. She created the role of Daisy Buchanan in John Harbison's The Great Gatsby in its world premiere at the Metropolitan Opera, and the role of Clemence in Kaija Saariaho's L’Amour de loin at the Salzburg Festival; Upshaw also was in the premiere performances of John Adam’s oratorio El Niño. In her work as a recitalist, and particularly in her work with living composers, Upshaw has become a generative force in concert music, having premiered more than forty-five works throughout her career. In 2007, she was named a fellow of the MacArthur Foundation, the first vocal artist to receive the award. A five-time Grammy Award winner, Upshaw is featured on more than sixty recordings, including Nonesuch’s million-selling Symphony No. 3 by Henryk Górecki and twelve other albums for the label, beginning with 1989’s Grammy–winning Knoxville: Summer of 1915.

Gilbert Kalish leads a musical life of unusual variety and breadth. His profound influence on the musical community as an educator and pianist in myriad performances and recordings has established him as a major figure in American music making. He was the pianist of the Boston Symphony Chamber Players for thirty years and was a founding member of the Contemporary Chamber Ensemble, a group devoted to new music that flourished during the 1960s and ’70s. Kalish’s discography encompasses classical repertory, twentieth century masterworks, and new compositions. Of special note are his solo recordings, many on the Nonesuch label, of Charles Ives’s Concord Sonata and the sonatas of Joseph Haydn, as well as an immense discography of vocal music with Jan DeGaetani (Dawn Upshaw’s teacher) and landmarks of the twentieth century by composers such as Carter, Crumb, Shapey, and Schoenberg. Kalish is a Distinguished Professor at SUNY Stony Brook and the Director of the international program at the Music@Menlo festival.

Through its interpretations of modern classics, innovative multi-genre original productions, and “exhilarating blend of precision and anarchy, rigor and bedlam” (New Yorker), Sō Percussion has redefined the scope and role of the modern percussion ensemble. Sō’s repertoire ranges from twentieth century works by John Cage, Steve Reich, and Iannis Xenakis, et al, to commissioning and advocating works by contemporary composers such as David Lang, Julia Wolfe, Steven Mackey, and Caroline Shaw, to distinctively modern collaborations with artists who work outside the classical concert hall, including Shara Nova, choreographer Susan Marshall, The National, Bryce Dessner, and many others. Sō has recorded more than twenty albums, including a performance of Reich’s Mallet Quartet on the Nonesuch record WTC 9/11; appeared at Carnegie Hall, Lincoln Center, Walt Disney Hall, the Barbican, the Eaux Claires Festival, MassMoCA, and TED 2016; and performed with Jad Abumrad, JACK Quartet, the Mostly Mozart Festival Orchestra, and the LA Phil and Gustavo Dudamel, among others.

All music written by Caroline Shaw 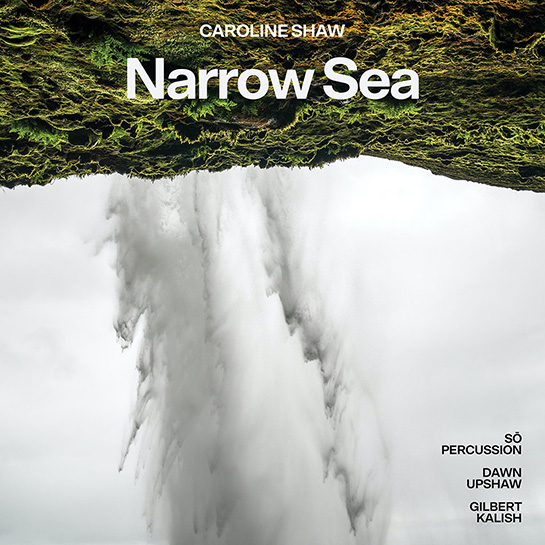