This 2001 Grammy winner brings together the music of Wolfgang Amadeus Mozart (and his father, Leopold), with three works inspired by him by contemporary Eastern European composers Alexander Raskatov, Valentin Silvestrov, and Alfred Schnittke, which invoke Mozart’s memory in ways direct and more subtle. The more familiar Mozart pieces sandwiched in serve to bring the listener to a new way of hearing the more familiar pieces.

After Mozart, the 2001 Grammy winner for Best Small Ensemble Performance, by Gidon Kremer and Kremerata Baltica, brings together the music of Wolfgang Amadeus Mozart (and his father, Leopold), with three contemporary works inspired by him. The works included, by contemporary Eastern European composers such as Alexander Raskatov, Valentin Silvestrov and Alfred Schnittke, invoke Mozart’s memory in ways direct and more subtle, and the more familiar Mozart pieces sandwiched in serve to bring the listener to a new way of hearing the more familiar pieces. The disc is an attempt, in Kremer’s words, to “set Mozart in the frame of our own time.”

Opening the disc is 5 Min. aus dem Leben von W.A.M. (“Five Minutes from the Life of W.A. Mozart”) by Moscow-born composer Alexander Raskatov, named “one of the most interesting composers of his generation” by Alfred Schnittke. The young Canadian pianist Naida Cole is soloist in Valentin Silvestrov’s The Messenger. And Schnittke himself is represented by his sardonic Moz-Art à la Haydn, a humorous reflection on the two Austrian masters, scored for two violins and strings. Mozart’s Serenata Notturna in D Major and Eine Kleine Nachtmusik, one of his most widely known works, round out the disc, which closes with Leopold Mozart’s Kinder-Symphonie (“Berchtolsgadener”) in C Major.

Kremerata Baltica, whom the Los Angeles Times calls "extraordinary young players ... [who] animate everything their bows touch” was founded by Gidon Kremer in 1996. An orchestra of young musicians from the three Baltic States, they first performed in Riga, Latvia, in February 1997 and have gone on to tour throughout the world. Kremer had long sought to share his rich artistic experience with young musicians in his native Latvia and the Baltic region, and was prompted to form a more lasting relationship with the artists, as a way to give back to the community that fostered his own musical growth. Kremer, who acts as the group’s artistic director, said, in an interview for the New York Times, that it functions as “a musical democracy ... open-minded, self-critical, a continuation of my musical spirit.” 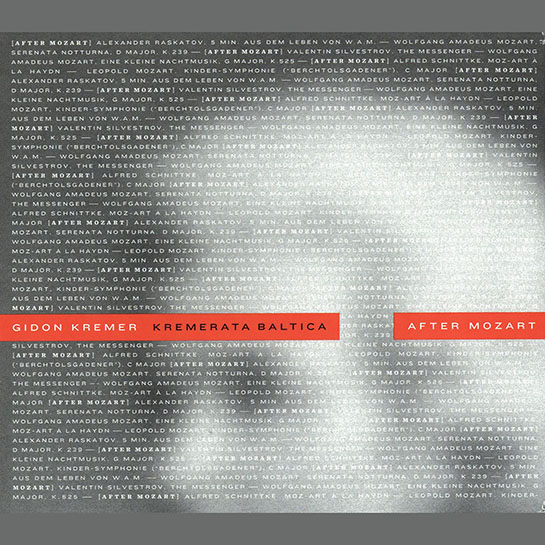