Kremer interpolates Vivaldi's Four Seasons with Astor Piazzolla's modern, four-part contemplation of the same theme. Says the Los Angeles Times, "Back and forth we go with ease between 17th-century Venice and 20th-century Buenos Aires, between Baroque dance and Argentine tango, the globe's hemispheres and history all made one."

Gidon Kremer, whose interpretation of the music of Astor Piazzolla has brought increased recognition to an already distinguished career, continues to push the boundaries of music-making on Eight Seasons. Together with the Kremerata Baltica, a group of young musicians from the Baltic States he assembled in 1996, the album takes the listener on a musical journey across two centuries and two hemispheres.

The idea for Eight Seasons began more than a decade before the album's 2000 release, when Kremer sought out several composers in hopes of commissioning a new version of Vivaldi’s masterpiece The Four Seasons, to be written with the same instrumentation as the original but in the chosen composer’s unique style. After seeking out composers like Alfred Schnittke, Luigi Nono, and Arvo Pärt, he found that they all resisted the idea of trying to approach something that would come so close to Vivaldi’s original work. Several years later, when Kremer first discovered Piazzolla’s opera Maria de Buenos Aires, he also learned that among some of the Piazzolla works in his repertoire was Invierno porteño (Winter in Buenos Aires). Shortly thereafter he found that within the Piazzolla catalog there existed other seasons as well.

After recording Maria de Buenos Aires, Kremer had the idea to re-orchestrate Piazzolla’s Cuatro estaciones porteñas (The Four Seasons of Buenos Aires) and combine it with Vivaldi’s Four Seasons, so he proceeded with the help of the composer Leonid Desyatnikov, a close associate who assisted with arrangements of some of Kremer’s previous Piazzolla recordings. Kremer views the Eight Seasons as a dialogue of sorts between Piazzolla and Vivaldi, and says, “it is Desyatnikov’s achievement to make Piazzolla speak directly to Vivaldi, and in such a way also Vivaldi to Piazzolla, because using certain quotations of Vivaldi in the context of the score helps to build bridges between these two different geniuses, two different cycles, two different worlds, making them a unit, a unity, giving them full exposure of the vitality, not just on its own but in the dialogue, making this dialogue possible.”

Kremer believes that although both works stand on their own as masterpieces, combining Piazzolla’s Four Seasons with Vivaldi’s does not diminish the power of either of them, but rather magnifies it. “Playing it or listening to it, you enter another world,” Kremer says. “You enter a world in which you don’t think any more about the glamor of the music or music-making. Kremerata Baltica and I are trying to serve the cause of music as a language, music as something that is electrifying, as something that reminds us of being alive, that was an important ingredient of life centuries ago and will remain an important ingredient of life for centuries to come. This is not music that can be put on a museum shelf.”

Eight Seasons is a project in which the borders, between musical genres, continents and centuries, are eliminated, and what endures is the consistent quality of the works themselves. For Kremer and his Kremerata Baltica, a group of young musicians from the independent Baltic states of Latvia, Lithuania, and Estonia, their common language is a musical one. The ensemble’s performance breathes new life into the Vivaldi work without compromising its essence, and introduces audiences to Piazzolla’s lesser-known and eminently worthy composition. 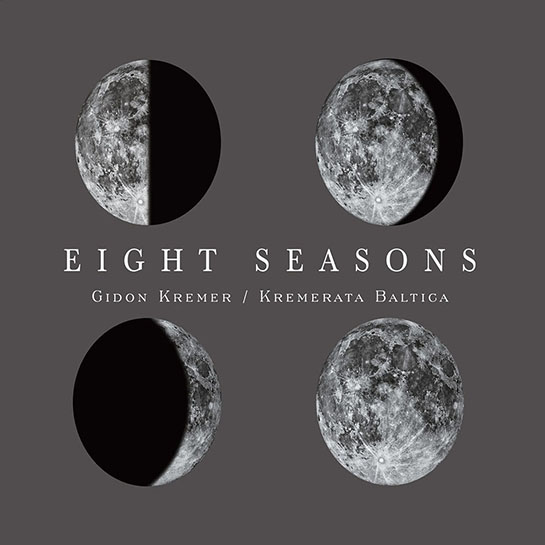