The New York Times praised Kremer's 2006 Mostly Mozart performance of the complete Mozart violin concertos with the Kremerata Baltica for his "ability to make a work, however familiar, entirely his own.” On this two-disc set of the concertos, recorded at the Salzburg Festival two days later, Kremer "captures the restlessness" of the pieces, says the New Statesman, while the orchestra "plays with tight ensemble and gleamingly honed tone." The Scotsman gives it a perfect five stars and exclaims: "This double album is truly sensational."

Following the Grammy Award–winning Latvian violinist’s performance of the complete Mozart violin concertos at Lincoln Center’s 2006 Mostly Mozart Festival, the New York Times declared: “Gidon Kremer's great interpretive strength has always been his ability to make a work, however familiar, entirely his own, dissimilar in most important details from the way other violinists play it, yet fully within both the spirit and letter of the score.”

This new two-disc set, with historical liner notes by critic and musicologist Michael Steinberg, presents Kremer and Kremerata Baltica, his touring ensemble of young musicians from the Baltic States, in a performance of Mozart’s five violin concertos, recorded at the Salzburg Festival in Austria two days after his Lincoln Center shows. Said Times critic Allan Koznin of the New York event, “Mr. Kremer's phrasing, in both his solo lines and his direction of the orchestra, avoided the predictable or the metronomic: phrases ebbed and flowed, with sharp accenting and dynamic contrast that kept the music fresh and, in its best moments, surprising. In all five works Mr. Kremer played the concise, stylish cadenzas by Robert Levin, which adhered to the conventions of Mozart's time.”

According to the Seattle Post-Intelligencer, “You can't ever expect a performance by violinist Gidon Kremer to be staid, or even ordinary. His fertile and original mind, married to phenomenal technique and great musicianship, makes every concert in which he appears a musical adventure.” In his Nonesuch career, the 62 year-old Kremer has perhaps most famously explored the repertoire of Astor Piazzolla; in 2003, he released a specially commissioned piece, Russian Seasons, by Ukrainian composer Leonid Desyatnikov, pairing it on disc with an interpretation of Tchaikovsky’s 12-part The Seasons. On his 2001 After Mozart, Kremer contrasted Mozart’s own work with Mozart-inspired pieces by contemporary Eastern European composers Alexander Raskatov, Valentin Silvestrov, and Alfred Schnittke. 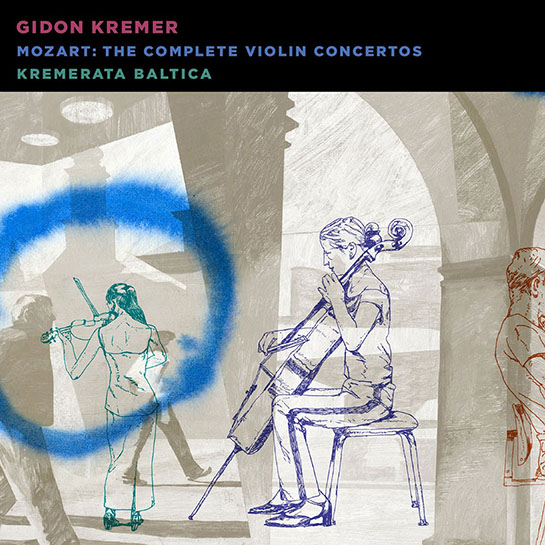