Honoring Kremerata Baltica's sixth anniversary, violinist Kremer and his ensemble perform, with wit and virtuosity, variations on such celebratory themes as "Happy Birthday" and "Auld Lang Syne." "Beautifully programmed and beautifully played," says the Boston Herald, "Kremer's Happy Birthday is the best present you could ask for."

Gidon Kremer, in describing Happy Birthday, his 2003 album with Kremerata Baltica, said, “Our intention has always been to awaken the listener by a kind of shock to the senses, which, in this case, is a humorous one; to make him or her aware that music is able to not only glide easily on the surface of our senses, but also permeate more deeply, enriching us (the listeners) with emotions, fantasies, laughter and insights.”

Although the works on Happy Birthday share seemingly transparent origins, the performances reveal a new sensibility, unexpected elegance, naïve playfulness and exquisite virtuosity. They not only afford us the pleasure of recognition, but also serve to nudge us out of our listening rut, by hearing familiar themes in unaccustomed ways.

In the title track, the world’s most familiar theme is given eleven new sets of stylistic clothes in variations by Peter Heidrich. Tunes such as Auld Lang Syne (in variations by Franz Waxman) and God Save the King are re-interpreted as well, offset by less expected works such as Alfred Schnittke’s PolkaElegy. The juxtaposition of works on and Tchaikovsky’s Happy Birthday is a gallant flirtation with cultural memory and collective perception. It affords the listener the opportunity to listen in startlingly new ways, with equal parts virtuosity and good humor.

Kremerata Baltica, whom the Los Angeles Times calls “extraordinary young players ... [who] animate everything their bows touch,” was founded by Gidon Kremer in 1996. An orchestra of young musicians from the three Baltic States, they first performed in Riga, Latvia in February 1997 and have gone on to tour throughout the world. Kremerata Baltica recently signed an exclusive, six-record agreement with Nonesuch Records, inaugurated in 2000 with the release of Eight Seasons, a re-orchestration of Piazzolla’s Cuatro estaciones porteñas paired with the Vivaldi classic. The group went on to release the Grammy Award-winning recording After Mozart in 2001, followed by a recording of two works by Enescu in 2002 to much critical acclaim. 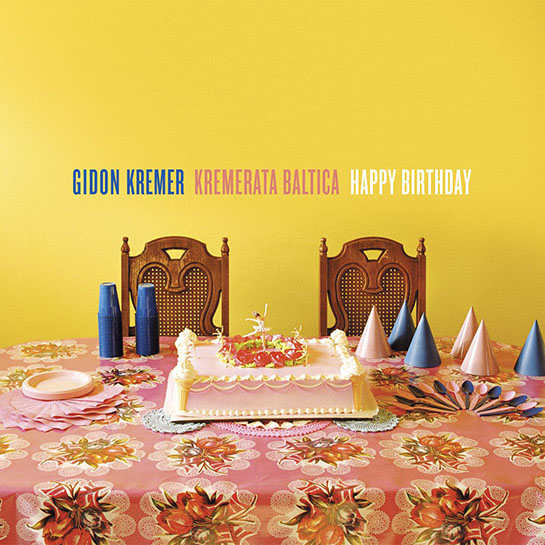