Yo-Yo Ma and Edgar Meyer's first recording together was the 1996 album Appalachia Waltz, which also featured fiddler Mark O'Connor; that album was followed by Appalachian Journey, also with O'Connor, in 2000. Meyer and Thile also began playing together nearly two decades ago, and first performed live as a duo in 2003. They have made two duo albums, 2008's Edgar Meyer & Chris Thile and the Grammy–winning 2014 record Bass & Mandolin.

Thile then joined Meyer on Ma's 2008 holiday album, Songs of Joy and Peace, before the trio reunited, along with Stuart Duncan, for The Goat Rodeo Sessions, an album of original tunes drawing from the musicians' backgrounds in bluegrass, classical, and American roots music. The Goat Rodeo Session debuted at number twenty-three on the Billboard 200 chart and number one on the classical and classical crossover charts, as well as number one on the bluegrass chart, where it stayed for eleven weeks. The album was also critically praised, with the Los Angeles Times calling it "haunting, invigorating, often breathtaking."

As Ma told Billboard at that time: "How often do you work with people who are master virtuosos and also master improvisers and composers, who know at least two musical traditions unbelievably well?" He continued, "It's just extraordinary when you have people who can actually show on their instruments what they're thinking at any moment, without a delay. As soon as you think it, it gets transferred in your neuromusculature immediately into sound."

The New York Times said of Yo-Yo Ma, who is considered one of today's foremost interpreters of Bach, "Other cellists hear Bach's suites the same as Mr. Ma, but few if any have the technical means to transfer their imaginings so precisely into sound." Ma maintains a balance between his engagements as soloist with orchestras worldwide and his recital and chamber music activities. His discography includes more than one hundred albums, eighteen of which have won Grammy Awards. Ma also serves as the Artistic Director of Silkroad, an organization he founded to promote cross-cultural performance and collaborations. More than eighty works have been commissioned specifically for the Silk Road Ensemble, which tours annually. Ma also serves as the Judson and Joyce Green Creative Consultant to the Chicago Symphony Orchestra's Negaunee Music Institute and in 2016 was appointed Artistic Advisor to the Kennedy Center for the Performing Arts.

Yo-Yo Ma was born in Paris to Chinese parents who later moved the family to New York. He began to study cello at the age of four, attended The Juilliard School, and in 1976 graduated from Harvard University. He has received numerous awards, among them the Avery Fisher Prize (1978), the National Medal of Arts (2001), and the Presidential Medal of Freedom (2010). In 2011, Ma was recognized as a Kennedy Center Honoree. He has performed for eight American presidents, most recently at the invitation of President Obama on the occasion of the 56th Inaugural Ceremony.

Throughout a lifetime of performing and composing, Edgar Meyer has turned the double bass into a modern virtuoso instrument that is equally at home in classical music and in the American vernacular. In 1994, Meyer became the first bassist to win the Avery Fisher Prize. He is also a recipient of the prestigious MacArthur Foundation "Genius" Award and five Grammy Awards. Meyer has found devoted audiences through a vast range of projects, from his own double bass concertos that he continues to perform regularly to recital collaborations with Emanuel Ax and Amy Dorfman and performance and recording projects with artists including Joshua Bell, Yo-Yo Ma, Béla Fleck, Zakir Hussain, Mark O'Connor, Sam Bush, Jerry Douglas, Mike Marshall, and many others. The New Yorker calls him "the most remarkable virtuoso in the relatively unchronicled history of his instrument."

MacArthur Fellow Chris Thile is the founding member of Punch Brothers, which a Boston Globe reviewer recently called "the tightest, most impressive live band I have ever seen." The group's four Nonesuch albums are Punch, Antifogmatic, Who's Feeling Young Now?, and The Phosphorescent Blues. Thile's other Nonesuch releases include a duet album of traditional bluegrass songs with guitarist Michael Daves, Sleep with One Eye Open, and a prominent role in the T Bone Burnett–produced soundtrack to the Coen brothers' film Inside Llewyn Davis. As a soloist, he has released five albums—most recently the highly praised Bach: Sonatas and Partitas, Vol. 1—and performed extensively as a duo with fellow eminent mandolinist Mike Marshall. He spent 15 years as a member of the Grammy Award–winning, multi-platinum selling band Nickel Creek, which reunited in 2014 for its highest-charting album to date, A Dotted Line (Nonesuch), and an extensive tour. Thile has also collaborated with a pantheon of bluegrass innovators including Béla Fleck, Dolly Parton, Jerry Douglas, and Sam Bush. 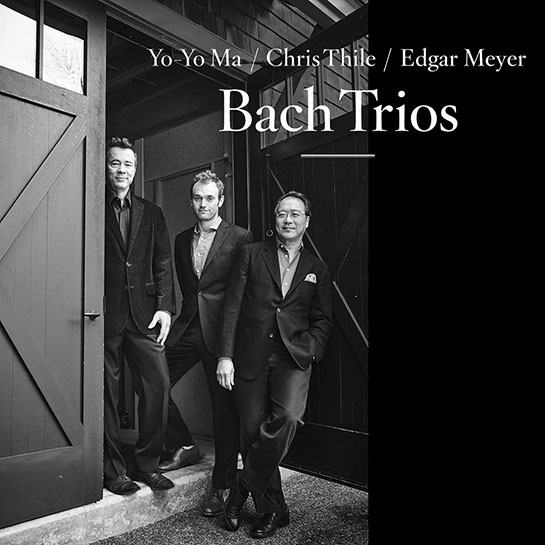