Bass & Mandolin, the second recording collaboration by bassist Edgar Meyer and mandolinist Chris Thile, features ten original compositions by the two artists, who have been performing together sporadically for more than a decade and made their recording debut as a duo with 2008’s Edgar Meyer & Chris Thile. Meyer also plays piano on the album and Thile plays guitar. Grammy Award Winner: Best Contemporary Instrumental Performance.

Nonesuch releases the second recording collaboration by bassist Edgar Meyer and mandolinist Chris Thile—Bass & Mandolin—on September 9, 2014. The album features ten original compositions by the two artists, who have been performing together sporadically for more than a decade and made their recording debut as a duo with 2008’s Edgar Meyer & Chris Thile, which the Washington Post, among others, praised, saying “Thile and Meyer are most enthralling when they pass a melody back and forth, fingers flying.” Meyer also plays piano on the album and Thile plays guitar.

Meyer and Thile began playing together 15 years ago, and began performing live as a duo in 2003. Thile says, “We have grown a lot as a collaborative entity between our first recording and now, at least partially due to our work together on The Goat Rodeo Sessions collaboration with Yo-Yo Ma and Stuart Duncan. As collaborators, we’ve found a warmer voice to share.” Meyer adds, “Chris is comfortable with all kinds of improvising, with lots of different musical feelings and rhythmic feelings. With him I can do anything I want. I can just be a bass player or I can play the melody. There are not many people with whom I have so much common ground. We can get to the bottom of things very quickly.”

Throughout a lifetime of performing and composing, Edgar Meyer has turned the double bass into a modern virtuoso instrument that is equally at home in classical music and in the American vernacular. In 1994, Meyer became the first bassist to win the Avery Fisher Prize. He is also a recipient of the prestigious MacArthur Foundation “Genius” Award and four Grammy Awards. Meyer has found devoted audiences through a vast range of projects, from his own double bass concertos that he continues to perform regularly to recital collaborations with Emanuel Ax and Amy Dorfman and performance and recording projects with artists including Joshua Bell, Yo-Yo Ma, Bela Fleck, Zakir Hussain, Mark O’Connor, Sam Bush, Jerry Douglas, Mike Marshall, and many others. The New Yorker calls him “the most remarkable virtuoso in the relatively unchronicled history of his instrument.”

MacArthur Fellow Chris Thile is the founding member of Punch Brothers, which a Boston Globe reviewer recently called “the tightest, most impressive live band I have ever seen.” The group’s three Nonesuch releases are Punch, Antifogmatic, and Who’s Feeling Young Now? and a fourth is slated for an early 2015 release. Thile’s other Nonesuch releases include a duet album of traditional bluegrass songs with guitarist Michael Daves, Sleep with One Eye Open, and a prominent role in the T Bone Burnett–produced soundtrack to the Coen brothers’ film Inside Llewyn Davis. Thile recently collaborated with Yo-Yo Ma and Meyer for the double Grammy Award–winning album The Goat Rodeo Sessions. As a soloist, he has released five albums—most recently the highly praised Bach: Sonatas and Partitas, Vol. 1—and performed extensively as a duo with fellow eminent mandolinist Mike Marshall. He spent 15 years as a member of the Grammy Award–winning, multi-platinum selling Nickel Creek, which reunited this year for its highest-charting album to date, A Dotted Line (Nonesuch). Thile has also collaborated with a pantheon of bluegrass innovators including Béla Fleck, Dolly Parton, Jerry Douglas, and Sam Bush.

All songs by Chris Thile & Edgar Meyer except “Friday,” by Edgar Meyer 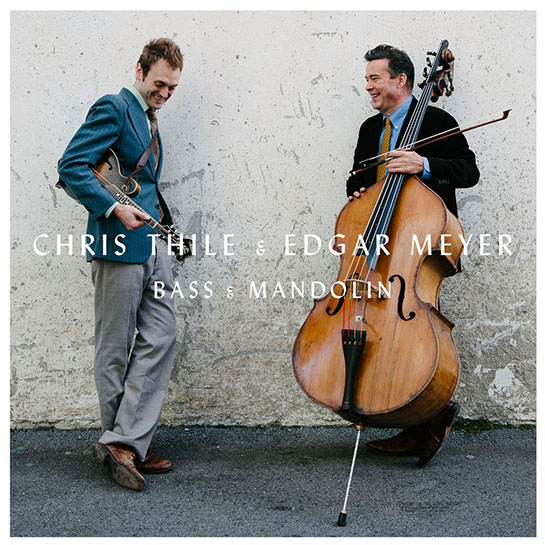