Sleep with One Eye Open

Sleep with One Eye Open, the debut album from mandolin-virtuoso Chris Thile and guitar maven Michael Daves, was recorded live to tape over four days at Jack White’s Third Man studio in Nashville. The album is a collection of 16 traditional tunes by bluegrass legends like The Monroe Brothers, The Louvin Brothers, Jimmy Martin, and Flatt & Scruggs. The duo makes for "a rip-roaring partnership," says the New York Times. "Bluegrass, in their hands, gets roughed up in the best possible way, with skill and fervor, and a touch of abandon." Nonesuch Store orders include the bonus download "Sophronie."

Sleep with One Eye Open is an impassioned collaboration/conversation between mandolin virtuoso Chris Thile and guitarist Michael Daves in which the subject is bluegrass, specifically how this upstart duo can acknowledge history and tradition while exuberantly defying convention. Though it was recorded in four feverish days of sessions at Jack White’s Third Man studio in Nashville, the album has deep roots in a serendipitous side of New York City that reveals itself at certain times of the night, when strangers become kindred spirits as clubs empty out, and only the hardiest souls stick around to keep the music playing. It’s a story that begins, like so many, with a guy walking into a bar.

In August 2005, a newly divorced but still smarting Thile had come to New York City to test his urban mettle. He was looking for a bracing change of scene from the San Diego area where he’d grown up and where, as a precocious kid, he’d formed Nickel Creek with Sara and Sean Watkins: “I decided I would go when I’d heard New York is the worst, when it smelled like trash and it would generally be a big sticky mess, and I plopped myself right in the middle of the Village.” Though he’d envisioned this trip as a solitary one, friends persuaded him to come out to a mid-week bluegrass jam at the Baggot Inn. As Thile now recalls, “It was just this cool vibe-y thing, nothing too out of the ordinary—until Michael started playing. Then I was just like, whoa, who is this guy?”

An Atlanta native, Daves, like Thile, grew up playing bluegrass with his fiddle- and banjo-playing parents, but he drifted towards jazz and the outer fringes of rock after he’d migrated north to attend Hampshire College in Amherst, Massachusetts. After college, he settled in New York City envisioning a career as a jazz cat, but found himself, despite the urban setting, drawn back to bluegrass: “I didn’t expect for New York to be such a big part of that for me, but it proved fruitful. There was a lot of great music going on and there were these late night jam sessions like I’d played in during high school. New York is a challenging and inspiring place to be because you are rubbing elbows with great jazz musicians, rock musicians, artists, writers, everyone doing what they do so well. Coming from this kind of laid-back college town, it was amazing to move to where everyone was so much more purposeful and serious about what they were doing. At the time I went there it felt like this niche had opened up for what I was ready to do musically, so I started playing bluegrass on my own.”

That fateful August night at the Baggot Inn, recounts Daves, “I was very surprised to see Chris show up; it had been kind of a dead night. He hung out talking to some people and we ended up playing a couple of tunes together. After everybody else had stopped playing and things were dying down, we went off to a corner and ended up jamming for a couple of hours. I knew he played the mandolin in a refined technical manner while I found myself more interested in basic, raw stuff. But once we started playing we totally hit it off and I realized he was a very adventurous musician. We went to places musically, even in that first meeting, that I had never gone to with other players, so it was really exciting just for that experience itself, to be so pleasantly surprised at how much Chris had to offer beyond his technical prowess, beyond the very clean presentation of Nickel Creek. He was really going for it.”

Two years after Daves’ and Thile’s first encounter, Nickel Creek had gone on an indefinite hiatus and Thile had officially become a New Yorker. He’d channeled lingering feelings about his marital breakup into a remarkably ambitious 40-minute, four-movement suite-cum-confession, The Blind Leaving the Blind, that premiered in March 2007 at no less a venue than Carnegie Hall. For that project, Thile had enlisted four similarly intrepid musicians who, with Thile, would shortly thereafter christen themselves Punch Brothers. The suite became the centerpiece of the quintet’s 2008 Nonesuch debut, Punch. Essential to Thile’s new life in Manhattan and his overall emotional revival was that Wednesday night jam at the Baggot Inn and the musical dialogue he’d embarked upon with the Brooklyn-based Daves, who by then was teaching guitar by day and often playing his own dates by night.

“I kept going to that jam,” says Thile, “in part because it was just a fun scene and there was this good local stout on draft, but also very pointedly to hang with Michael and play tunes with him. I have a tendency to over-think things and to put too severe a microscope on everything that’s being played or sung, and I can squeeze the life out of some music as a result. Michael helps me get out of that part of my musicianship. He has such a visceral relationship to music and that kind of frees up that side of my own musicianship. And that’s so important, especially playing these tunes. I feel like when Michael and I are firing on all cylinders, it’s like being possessed. It’s liberating, all of a sudden being given license to not think so goddamned much and to just let it fly.”

Daves and Thile knew they wanted to cut a record together and spent an inordinate amount of time mulling over exactly how to approach it. Daves admits, “We felt we needed to have a concept; we shouldn’t just try and go to record an album until we really knew what we wanted to say with it. Finally, Nonesuch head Bob Hurwitz told us, ‘You need to just do what you do.’ We decided to go down to Nashville and get good performances of the songs with the understanding that spontaneity is a big part of what we do.” Thile agrees: “It seemed like it kept being the best if we just showed up and went at it.”

The pair wanted White Stripes/Raconteurs/Dead Weather guitarist Jack White to produce the album, having been impressed by the work he’d done with Loretta Lynn and, more recently, with Wanda Jackson (on Third Man/Nonesuch’s The Party Ain’t Over). White only had time to cut two sides with Daves and Thile—to be released as a single on Third Man Records—but he gave them free rein of his studio and White’s engineer Vance Powell stuck around for all of the sessions. White would occasionally pay them encouraging visits. Says Thile, “Jack was really, really generous and let us cut the whole record at his place on his beautiful two-inch eight-track machines. It was just so much fun, man, like records ought to be—all ribbon mics and not that many of ‘em, and singing into just one RCA 77. It’s just like we do live, huddled around a microphone doing our best.”

Over the course of four days, the pair recorded 23 tracks, choosing 16 for the album. The material was drawn from the bluegrass canon: traditional tunes plus classic numbers from Bill Monroe, Lester Flatt, and Earl Scruggs. Songs like “Loneliness and Desperation” and the title track emphasize rollicking, rapid-fire arrangements that serve to mask the most sorrowful of feelings, an approach that Thile has extrapolated on in his own wider-ranging compositions with Punch Brothers. Daves’ and Thile’s voices blend as seamlessly—and, on tracks like “Bury Me Beneath the Willow,” as plaintively—as their instruments. As Thile says, “Mandolin and guitar and two male voices—it’s such a good sound. What was important for us was to get that brother duet thing but with this Lower East Side punk energy. One of the most enjoyable things about this experience was to underline the slightly delinquent side of bluegrass.

“Bluegrass gets all of its emotion, all of its righteousness from humanity and the mistakes that humans make,” Thile concludes. “It needs that humanity and celebrates it. We were mindful of that. All the work for this record had already been done at the jam sessions and at the shows we put on at the Rockwood Music Hall, we just had to take a snapshot of it. I think we found a way to maintain our wide-eyed wonder about this stuff and deliver it with the sincerity of people who need to play this music to feel good.” 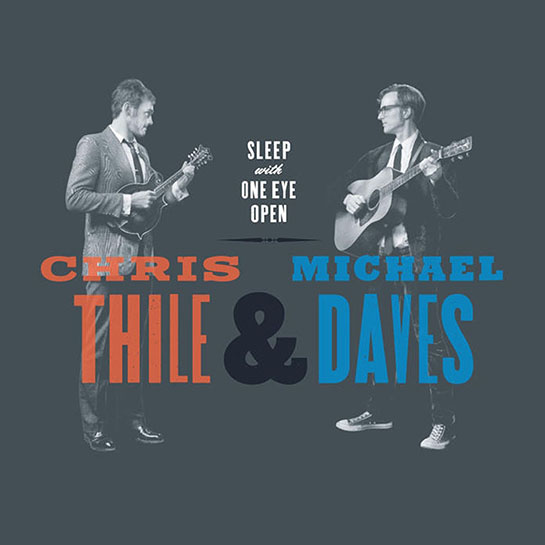