Heart of a Dog

Laurie Anderson's first feature film in 30 years, Heart of a Dog is a personal essay on joy and heartbreak and remembering and forgetting, at the heart of which is a lament for her late beloved dog Lolabelle. The New York Times calls it "dreamy, drifty, and altogether lovely." New York says it's "one of the most moving and provocative films you’ll see this year." The Times of London says it's "a work of mastery: thought-provoking, smart and incredibly moving." The soundtrack is the full audio recording of the film, including all music and spoken text.

The complete soundtrack recording of Laurie Anderson's newest piece, Heart of a Dog, is available from Nonesuch Records on October 23, 2015. Anderson was recently commissioned by the European TV network Arte to create a feature film—her first in 30 years. Her response was a personal essay entitled Heart of a Dog, a work encompassing joy and heartbreak and remembering and forgetting, at the heart of which is a lament for her late beloved dog Lolabelle. The Nonesuch album is the full audio recording of the film, including all music and spoken text.

Heart of a Dog has been shown at the Telluride, Venice, and Toronto Film Festivals to critical praise, with the New York Times calling it a "philosophically astute, emotionally charged meditation on death, love, art and dogs." The movie will be screened at the New York Film Festival on October 8, before opening theatrically at New York's Film Forum October 21; visit the film's site for details. It also will be shown on HBO in early 2016.

In addition to Anderson's inimitably thoughtful narration, Heart of a Dog includes musical excerpts from several of her pieces—"The Lake" and "Flow" from Homeland (2010), "Beautiful Pea Green Boat" from Bright Red (1994), "Rhumba Club" from Life on a String (2001), excerpts from Landfall (2011) with Kronos Quartet—as well as the film's closing song "Turning Time Around," written and performed by Anderson's late husband, Lou Reed.

Laurie Anderson is one of America's most renowned—and daring—creative pioneers. Her work, which encompasses music, visual art, poetry, film, and photography, has challenged and delighted audiences around the world for more than 30 years. Anderson is best known for her multimedia presentations and musical recordings. Her tours have taken her around the world, where she has presented her work in small arts spaces and grand concert halls, and everywhere in between. She has numerous major works to her credit, along with countless collaborations with an array of artists, from Jonathan Demme and Brian Eno to Bill T. Jones and Peter Gabriel.

Anderson's first album, O Superman, launched her recording career in 1980, rising to number two on the British pop charts and subsequently appearing on her landmark release Big Science. She went on to record six more albums with Warner Brothers. In 2001, Anderson released her first album with Nonesuch Records, the critically lauded Life on a String. Her subsequent releases on the label include Live in New York (2002), a reissue of Big Science (2007), and Homeland (2010).

Score composed by Laurie Anderson. "The Lake" and "Flow" from Homeland (2010), "Beautiful Pea Green Boat" from Bright Red (1994), "Rhumba Club" from Life on a String (2001), excerpts from Landfall with Kronos Quartet (2011). "Turning Time Around" written and performed by Lou Reed, courtesy of Warner Bros. Records.

dedicated to the magnificent spirit
of my husband, Lou Reed
1942–2013 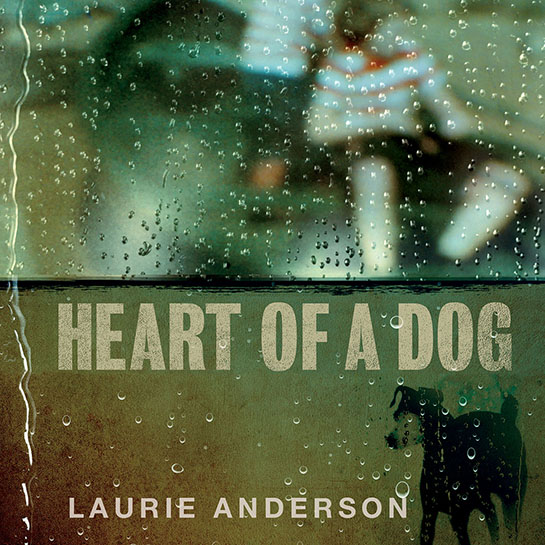