Pat Metheny’s new album Day Trip documents 17-time Grammy Award winner Metheny’s latest trio, featuring acclaimed sidemen Christian McBride (bass) and Antonio Sanchez (drums). This trio was formed by Metheny in 2002 and has played concerts all around the globe with performances in Australia, Europe, Asia, Africa and all across the United States and Canada. The group finally made it into the studio to record this music on a single day off during one of their most recent U.S. tours. All ten tracks on Day Trip are original Metheny compositions, including “Is This America? (Katrina 2005),” a song about the devastation in New Orleans, and “The Red One,” which first appeared on the John Scofield and Pat Metheny album I Can See Your House From Here (Blue Note 1994).

Over the course of three decades, guitarist Pat Metheny has set himself apart from the jazz mainstream, expanding and blurring boundaries and musical styles. His body of work includes 17 Grammy Awards in nine separate categories (breaking the record for multi-category wins); a series of influential trio recordings; award winning solo albums; scores for hit Hollywood motion pictures; and collaborations and duets with major artists such as Ornette Coleman, Steve Reich, Charlie Haden, Jim Hall and many others. His band, the Pat Metheny Group, founded in 1977, is the only ensemble in history to win Grammys for seven consecutive releases.

All tracks composed by Pat Metheny 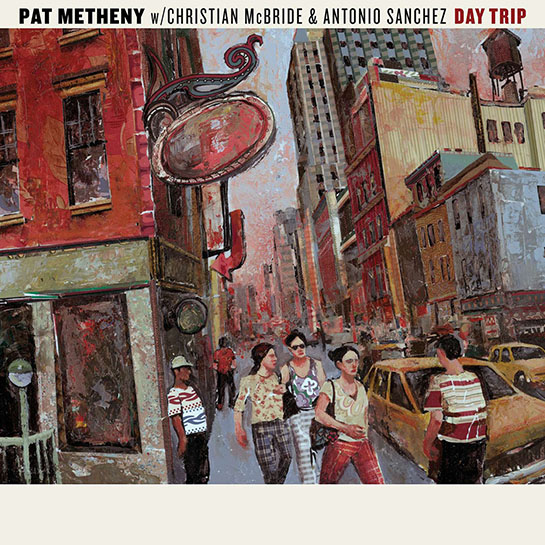