The Pat Metheny Group’s Nonesuch debut and the 2005 Grammy Award winner for Best Contemporary Jazz Album is a groundbreaking, through-composed 68-minute suite by Metheny and keyboardist Lyle Mays. London’s Evening Standard calls it “rhapsodic” and declares Metheny’s solos “as dazzlingly fluent as ever.”

"[T]the affable Missourian who invented the most recognizable sound in post-bebop jazz guitar … shows no signs of slowing down.” —Newsweek

THE WAY UP: THE COMPOSITION, THE ALBUM

With The Way Up, their 12th studio album at Pat Metheny's Nonesuch Records debut, the Pat Metheny Group has upped the ante significantly on all fronts. The Way Up is a single 68 minute long composition by Metheny and his longtime collaborator Lyle Mays that draws from the cumulative lessons learned throughout their 30 years together as a band to deliver a record of unprecedented structural depth and boundless imagination. Says Metheny:

As we have developed over the years, our interests have naturally gravitated towards longer and more detailed forms. That impulse to develop ideas fully and really follow through on what the material suggested was there even in the very earliest PMG stuff, but with the more recent albums it has become much more of a focus. During our last tour, especially with the addition of drummer Antonio Sanchez, we realized that there were no limits to how far we could take our desire to expand things not only stylistically but also in terms of the actual forms we were addressing themselves. I think we have been leading towards an effort like this for quite awhile.

It is important to note that in the annals of jazz groups attempting to address longer forms there are many suites of loosely related songs bundled together to attempt to create a whole. This project is something more. Metheny offers, “There is a compositional integrity to the whole thing as a single piece. Each part of the structure is supported and developed over time and there are connections between things that are slowly revealed over the course of the whole piece.”

THE WAY UP: IMPROVISATION

One might think that with such an emphasis on the written material that the improvisational elements that have been such a focus of Metheny’s music may find themselves in a somewhat secondary position. Not so, says Metheny:

One major area of intrigue to me throughout the entire groups history has been to set up environments for ourselves to function in as improvisers that go beyond the traditional. This piece offers lots of room for very detailed kinds of improvising that are always derived from some element of the form itself. In some cases it might be the harmonic content of a particular passage that gets spun off and expanded in ways that draw from but go beyond the typical song form type improvisations that make up the bulk of what happens in jazz. In other cases, it may just be the sounds themselves that become the launching pad, as is especially true with the recent addition of trumpet player Cuong Vu, a master colorist, who adds so much to the band on a textural level.

THE WAY UP: GUITARS

When one thinks of Pat Metheny, a kind of signature sonic imprint immediately comes to mind. One of the more amazing aspects of that signature is how it can so easily migrate from such a wide array of actual guitar sounds. From the most simple acoustic touch to the most ferocious aural assault there is the essential Metheny quality at work. The Way Up offers a sonic smörgåsbord of guitar sounds that are unmistakably Metheny while at the same time introducing some intriguing expansions to his timbral palette:

One thing that we decided early on in this project was that in addition to the usual central place that guitar has sat in on a narrative level within the core quartet of the band, the role of the guitar in this music would also be a major orchestrational component for us this time by using the opportunities that the modern recording studio offers us through overdubbing. There are multiple layers of guitars along the way, often in odd tunings or played with unusual techniques such as with a slide or an ebow, that form a web of sound that is unlike anything you can get with a single guitar. It has been many years (since around Offramp) since I have really layered guitars like that on a record. With the rich harmonic language of this piece there were some really great opportunities to let the guitars function in this way.

THE WAY UP: THE MUSICIANS

The core of the the Pat Metheny Group has remained remarkably consistent over the course of its entire year history. Founded by Metheny in 1977, the group found early success through relentlessly touring the world and offering a fresh and new approach to the whole idea of what a jazz quartet could be. In Lyle Mays, Metheny found a brilliant pianist and like-minded musician whose talents and interests have continued to parallel Metheny’s own in an almost uncanny way. In 1980, the pair was joined by bassist Steve Rodby whose versatility and experience on both the acoustic and electric bass has given the group the rock solid foundation that has supported each increasingly evolved edition of the band.

In 2002, the core trio was joined by an exciting new drummer from Mexico, Antonio Sanchez, and the innovative Vietnamese-born Seattle-bred trumpeter Cuong Vu. Says Metheny:

With the addition of Antonio, suddenly it was a whole new ball game. We found ourselves with a drummer who is probably one of the most talented musicians of his generation, certainly one of the most talented people that this group has ever had, and his presence in the band really gave me a chance to kind of reflect on everything this group historically has been all about and where we could take it from here. When he and Steve first played together, there appeared to be amazing musical opportunities that could unfold with this rhythm section. As has happened at a few other junctures in the bands story, there is was this sense of the possibilities feeling totally unlimited.

I first heard Cuong on the radio one night in 2001 playing with his own band. I instantly became a fan and wanted to find out everything I could about him and eventually wound up hiring him. His presence on our last record and tour was just a scratch on the surface of what I felt we could do together. His sound is featured much more prominently on The Way Up and his playing has continued to evolve and grow. His role in the band goes so far beyond that of just a “horn player”. He is capable of painting textures and sounds that are as unexpected—sometimes you don’t even realize that it is a trumpet doing all that—as they are beautiful.

A NEW MEMBER AND MORE

And with this new record and the tour that follows it, the Pat Metheny Group is welcoming a new member to the fold; Swiss/American harmonica player Gregoire Maret. Metheny reports:

As we were writing the piece, I kept feeling there was a voice in the story that was missing. It was a breath sound, but not Cuong, not singing. Right around that time I heard Gregoire playing on a recording and then shortly after that live with Cassandra Wilson. I was impressed and it occurred to me that he could be the solution that we were looking for. I got my hands on all of the records I could find with him on there. We wound up getting together with Lyle and Steve and it was an instant perfect fit. I have to admit that I wouldn’t have thought of hiring a harmonica player until hearing Gregoire, He is one of those rare musicians whose talent transcends his instrument and you hear the sound of his spirit when he plays. We are thrilled to have him joining us for this project and tour.

Richard took time away from his busy career to join the PMG for our last record, Speaking of Now, and toured the world with us for the year that followed. We were happy to have him come in and participate as a percussionist on some of these sessions. And Dave Samuels has joined us in the studio for almost of the recent PMG projects adding a very special, subtle presence to the proceedings.

The recording took place over several sessions during the course of 2003 at Right Track Recording in New York City. The well-oiled production team of Metheny, Rodby and Mays were joined once again by their longtime engineer, Rob Eaton for the dates and the post-production period that followed.

Beyond everything we do together as players, Steve, Lyle and I, along with Rob Eaton, have worked on putting together so many records together on a production level that we can really communicate effectively amongst ourselves to get the kinds of results that reflect the level of quality that we all aspire to. In particular, the way Steve is able to function on so many levels during the organization and recording of these records is very important. He is one of the best people I have ever seen at getting the best possible results out of everyone and the material itself during a recording session.

As a production team, we have recorded so many times together over the years that we usually have a pretty precise sense of what is going to happen when and at approximately what rate before we start recording. Recording a long form piece like this had challenges that we had never really run across before and in many ways it was like shooting a film. But by spending a lot of time in the writing and planning stages really charting out our plan and intentions, we were able to tell the story in a way that I think ultimately ended up surpassing our wildest hopes for this project.

The result of all of this effort is a record for the ages. Over the course of it’s existence, the Pat Metheny Group has delivered music that has consistently been at the very highest level. The Way Up takes the basic premise of this music to an unimagined new horizon. With each record the fans of this band find themselves asking, what could they ever do to go beyond this. And then comes a record like this one, a record that is as surprising as it is inevitable.

The Way Up is a worthy addition to the extraordinary body of work that Metheny has been building since he burst onto the international jazz scene as an innovative 19-year-old in 1974 as a member of Gary Burton's Quartet. His work as a bandleader of the highest order of one of the most successful groups in jazz history stands as one of his most important achievements. Now as a just turned 50-year-old master, he continues to represent the highest possible musical standard of excellence with each release, with each solo, and at his best, with each note.

All songs composed by Pat Metheny and Lyle Mays

Design and photography by Doyle Partners 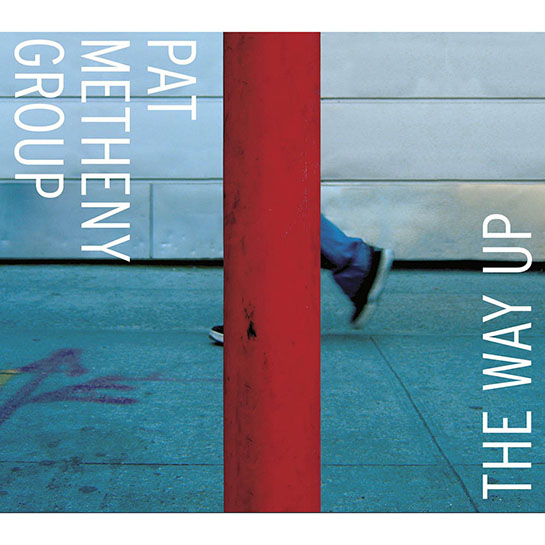