Recorded at a church in Greenpoint, Brooklyn, The Orchestrion Project showcases the full evolution of the Orchestrion as documented at the tail end of a sprawling 2010 world tour. The two-disc set features all five tunes from Metheny's Orchestrion—“a soaring five-movement suite featuring some of the most intricate music he's ever created" (Boston Globe)—plus eight additional Metheny compositions, which he plays on his phalanx of remarkable, custom-made instruments via solenoid switches and pneumatics. Q gives the album four stars, as does the Observer which calls it "fresh, elegant and surprising." The album, says the Financial Times, "captures the guitarist in inspired form."

In 2010, 20-time Grammy Award winner Pat Metheny took his musical exploration to a new territory with his Orchestrion, a computer controlled mini-orchestra capable of responding to his touch on guitar. After releasing the Orchestrion record, Metheny and his "band" hit the road, playing over 100 concerts around the world, culminating with the recording of The Orchestrion Project in Brooklyn, NY. This recording showcases the full evolution of the Orchestrion as documented at the tail end of a sprawling world tour and will be available on Nonesuch on February 12, 2013. The double-disc set features all five sections of Orchestrion—"a soaring five-movement suite featuring some of the most intricate music he's ever created" (Boston Globe)—plus eight additional Metheny compositions reimagined with the Orchestrion.

The Orchestrion itself is an assemblage of computer-operated acoustic instruments, all controlled by Metheny’s guitar. The full instrumental array includes several pianos, drum kits, marimbas, "guitar-bots," dozens of percussion instruments and even cabinets of carefully tuned bottles. Through Metheny’s guitar, the instruments are struck, plucked, and otherwise played via the technology of solenoid switches and pneumatics. Metheny worked for months with a brilliant team of scientists and engineers to develop and assemble the Orchestrion.

The Orchestrion album and tour received critical praise, with Jazz Times saying, "Mallets, bells, bottles, piano, cymbals and incidental percussion held forth in a spectacle of dissonance and extraordinary color, sounding like Metheny meets Boulez." And NPR Music said, "No matter who—or what—he has on stage with him, Pat Metheny plays music as if at the end of the show he would be prevented from doing so for the rest of his life. He makes every note matter, and infuses each with so much emotion that it’s very hard not to get swept up in the moment…he always looks like he’s having as much fun playing as we are listening. His tour with the Orchestrion will likely be talked about for quite a while."

Over the course of more than three decades, guitarist Pat Metheny has set himself apart from the jazz mainstream, expanding and blurring boundaries and musical styles. His record-setting body of work includes 20 Grammy Awards; a series of influential trio recordings; award-winning solo albums; scores for hit Hollywood motion pictures; and collaborations and duets with major artists such as Ornette Coleman, Steve Reich, Charlie Haden, Brad Mehldau, and many others. His band, the Pat Metheny Group, founded in 1977, is the only ensemble in history to win Grammys for seven consecutive releases.

Music Composed and Arranged by Pat Metheny, except “Broadway Blues,” by Ornette Coleman 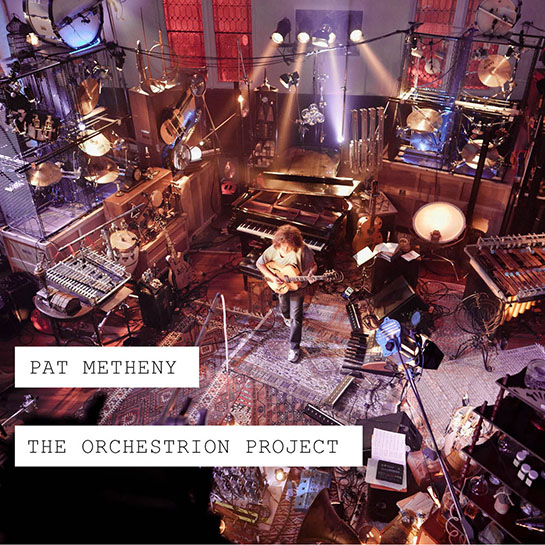