For the first time since his 1980 release 80/81, Metheny has recorded with a band that features tenor saxophone. Unity Band introduces a new Metheny ensemble of the same name with Chris Potter on sax and bass clarinet, longtime collaborator Antonio Sanchez on drums, and the up-and-coming Ben Williams on bass. The album features nine new Metheny compositions, "each one exquisitely performed and uniquely absorbing," says the Observer. All About Jazz says Unity Band is "unequivocally one of Metheny's finest—an album that's sure to find its way to 'best of' lists for 2012." Grammy Award winner for Best Jazz Instrumental Album.

For the first time since his 1980 release 80/81, guitarist Pat Metheny has recorded with a band that features tenor saxophone. Unity Band, due from Nonesuch on June 12, 2012, introduces a new Metheny ensemble with Chris Potter on sax and bass clarinet, longtime collaborator Antonio Sanchez on drums, and the up-and-coming Ben Williams on bass. The album features nine new Metheny compositions.

Metheny says of the three-decade gap since his last project to feature saxophonists (the late great Dewey Redman and Michael Brecker): “In many ways my bands were envisioned as an alternative to the more conventional kinds that I had come up playing in. The fact that it has taken another 30 years to get to it again is kind of a testament to how busy those ‘alternative’ ways of thinking have kept me.

“We all always talked about revisiting that band at some point, but with both Mike and Dewey gone now, that will never happen,” he continues. “But then Chris Potter came along. As a fan, I have watched as he has become one of the greatest musicians of our time, and when we were both invited to play on Antonio Sanchez’s debut record, I immediately saw that we had a natural way of playing and phrasing that suggested something more. I started thinking right then of somehow building a project around that.”

For the rhythm section, Metheny explains, “Antonio was kind of an obvious choice; he has been one of my closest associates over the past ten years and has also played a lot with Chris. He is such a special musician. There was a certain kind of power I knew that Chris and I would be getting to and I can’t think of anyone who could take us to that place better than Antonio.” He continues, “A few years ago, Christian McBride invited me to an event that he was leading with the jazz students at Juilliard. Ben Williams was featured on a few tunes and his playing spoke to me immediately. I used Ben a few times to sub for Christian with the trio and found him to be a great playing partner and a great person too. He and Antonio had an instantly effortless rapport.”

Once he had assembled this stellar band, Metheny wrote a considerable amount of new material for them. Through rehearsals, they winnowed the music down to the nine tunes on the Unity Band album. “It’s funny, I have heard so many guitar/tenor records that have been clearly influenced by that 80/81 sound, and yet I really wanted to try to take it to a different place this time, even though that record was certain to be a reference point along the way,” Metheny says. “One of Antonio’s specialties is this even eighth-note thing he does, and in a lot of ways that set a direction for the writing. But still, this is a group of musicians who can do just about anything.”

Over the course of more than three decades, guitarist Pat Metheny has set himself apart from the jazz mainstream, expanding and blurring boundaries and musical styles. His record-setting body of work includes 19 Grammy Awards in 12 separate categories; a series of influential trio recordings; award-winning solo albums; scores for hit Hollywood motion pictures; and collaborations and duets with major artists such as Ornette Coleman, Steve Reich, Charlie Haden, Brad Mehldau, and many others. His band the Pat Metheny Group, founded in 1977, is the only ensemble in history to win Grammys for seven consecutive releases. 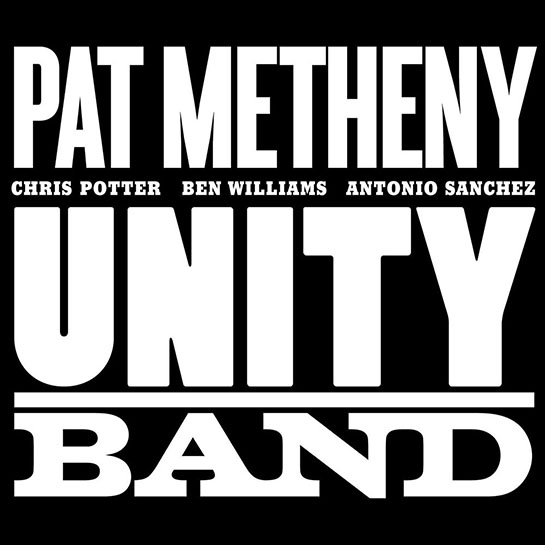