On the Grammy-winning Different Trains, performed by Kronos Quartet, Reich evokes his American childhood during World War II while also addressing the Holocaust. The New York Times declared it “a work of such originality that ‘breakthrough’ seems the only possible description.” Pat Metheny performs Electric Counterpoint.

Nonesuch Records' 1989 recording of Steve Reich's Different Trains, the Grammy Award winner for Best Contemporary Composition that year, and Electric Counterpoint has returned on vinyl for the first time in more than twenty-five years. The album features the first recordings of the two pieces, performed by Kronos Quartet and Pat Metheny, respectively. The vinyl edition—mastered by Robert C. Ludwig at Gateway Mastering in Portland, Maine, with lacquers cut by Bernie Grundman, and pressed on 140-gram vinyl at Record Industry in the Netherlands—was released on November 2, 2018, the 30th anniversary of Kronos Quartet's world premiere performance of Different Trains at Queen Elizabeth Hall in London. You can watch a new mini-documentary about Different Trains by Robert Edridge-Waks below.

On Different Trains, which combines string quartet with taped speech, Reich evokes his American childhood during World War II while also addressing the Holocaust. The New York Times declared it "a work of such originality that 'breakthrough' seems the only possible description."

Earlier this year, Pitchfork placed Different Trains / Electric Counterpoint at No. 93 on its list of the 200 Best Albums of the 1980s. It's a "late-career masterpiece" for the composer, wrote Pitchfork's Jazz Monroe of Different Trains. "The piece found a new tenor for Reich—clear-eyed, anguished, searching—that suited him. He wasn’t a minimalist upstart anymore; he was a moral conscience, albeit as earthbound and lost as the rest of us."

Electric Counterpoint was written for Pat Metheny, who gave the world premiere performance of the piece at Brooklyn Academy of Music's Next Wave Festival in November 1987. The guitarist performs against multiple pre-recorded tape of himself—and "splendidly," said the New York Times. The piece is "filled with jazz and funk-inflected rhythms, reveling in the spirit of American vernacular culture ... [and] finds Mr. Reich capitalizing on his strengths. Here, at the point furthest removed from convention, is where his creative juices flow most freely." 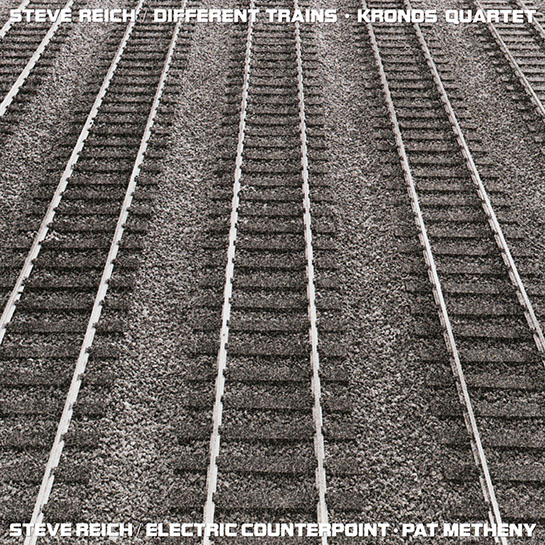