These pieces from 1994 to '96, said Salon, “embody both the old and new of Reich’s music”—sampled cityscapes, fragmented text, hypnotic percussion. In the title piece, London’s Independent noted, “the immediacy is tangible, the effect is disarmingly beautiful.”

In City Life, Reich combines music for his ensemble with sampled sounds recorded on the streets around his New York City apartment. As performed by the Steve Reich Ensemble, conducted by Brad Lubman, the piece provides a fascinating interplay between woodwinds, strings, percussion, piano, and car alarms, street vendors, pile drivers, and heartbeats. The work is divided into five movements: “Check it out,” “Pile driver / alarms,” “It’s been a honeymoon / Can’t take no mo’,” “Heartbeats / boats & buoys,” and “Heavy Smoke.”

City Life was commissioned by the Ensemble Modern (Frankfurt), the Ensemble InterContemporain (Paris), and the London Sinfonetta, and has also been played by the three co-commissioners of the piece throughout Europe. Reich has long incorporated street noise and speech into his compositions. Such early tape pieces as It's Gonna Rain (1965) and Come Out (1966) manipulated phase relations between multiple repeating patterns. The Grammy Award–winning Different Trains (1988) introduced the use of voice-based melodies. This concept of writing music from the spoken word was presented in an operatic form with the premiere of Reich and video artist Beryl Karat’s documentary opera The Cave in 1993, a piece that helped define a new genre of musical theater.

Proverb, a composition for voices, electric organs, and vibraphones, shows the influence of medieval French composer Perotin. It contains only one phrase of text—"How small a thought it takes to fill a whole life"—from philosopher Ludwig Wittgenstein. Paul Hillier conducts his group, Theatre of Voices, together with members of Steve Reich’s Ensemble, for this Nonesuch recording. Proverb was co-commissioned by the BBC Proms and the Utrecht Early Music Festival. It premiered as a work-in-progress in London, September 1995; the completed piece debuted in New York, February 1996. The Village Voice said of Proverb: “This was the piece you might have hoped would be written 20 years later by the same person who penned the gorgeous Music for Mallet Instruments, Voices and Organ.”

Nagoya Marimbas, an intricate piece for two marimbas, is played by long-time Reich colleagues Bob Becker and James Preiss in a virtuoso performance. It consists of frequently shifting but seldom repeated out-of-phase patterns, the whole fusing into a series of two-part unison canons. Nagoya Marimbas was commissioned by the Conservatory in Nagoya, Japan in honor of the opening of the Shirakawa Hall. 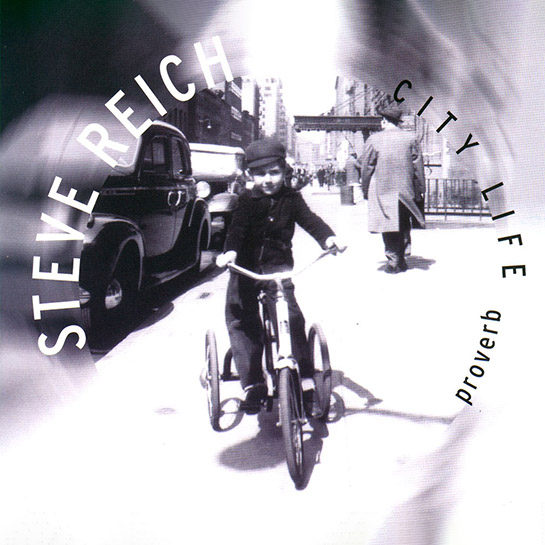