New York City’s Bang On A Can Ensemble passionately performs Reich. The Washington Post declared: Eight Lines is “a dazzling and invigorating work” and “no previous recording has ever come close to the clarity and ecstatic intensity” of Four Organs.

Available for the first time on a single disc, the Bang on a Can recordings of Steve Reich’s Four Organs (written in 1970), Eight Lines (Octet) (1979), and New York Counterpoint (1985), first appeared as part of the 10-CD box set Works 1965–1995, released in 1996 to commemorate Reich’s 60th birthday. These works, newly recorded by Bang on a Can in 1996, span the early part of the composer’s distinguished career, one whose style has been called “fiercely original, immediately recognizable and wholly accessible” (New York Times).

Four Organs, written in 1970 for four organs and maracas, is roughly a 20-minute piece (depending on the number of repetitions) that demonstrates the gradual elongation of a single chord, extended by one note at a time. The chord in question is the same dominant eleventh that was common in '70s rock, and the piece is played on four small Farfisa organs, then the standard electronic keyboard in the genre. The late K. Robert Schwarz, in a new liner note for the disc, noted that although Four Organs is not a phase piece, there is no loosening of musical process. “Instead,” Schwarz wrote, “Four Organs is a sonic demonstration of the most severe, reductive, and unyielding process Reich ever conceived. Today it remains as audacious and shocking as ever—an example of minimalist at its purest and most uncompromising.”

It was equally as shocking to audiences in New York in 1973, when Michael Tilson Thomas and the Boston Symphony Orchestra premiered the work at Carnegie Hall. The performance incited rioting in the audience—with some audience members running away screaming while others stayed and applauded. As notorious as the scene was at Carnegie Hall, the concert generated so much interest and momentum that it accelerated Reich’s rise to international recognition.

New York Counterpoint, commissioned by the clarinetist Richard Stoltzman, was written in 1985 for nine B-flat clarinets and three bass clarinets. Reich wrote three “counterpoint pieces” between 1982 and 1987, including Vermont Counterpoint, for multiple flutes, and Electric Counterpoint, for multiple guitars. The works are scored for one live performer who plays against up to a dozen recordings of himself. The canonic interplay creates a kind of layering of sounds, for a result that is akin to earlier phase pieces. Of the “counterpoint pieces,” New York Counterpoint is the most rhythmically intricate, and is heavily influenced by earlier jazz. It is heard in this recording by Bang on a Can clarinetist Evan Ziporyn.

Steve Reich, dubbed “America’s greatest living composer” by The Village Voice, is often identified with the Minimalist movement for the spare and stark rigor of his earlier works, although he has evolved into a composer of complex vision. The release of Works 1965–1995 traced his journey from youthful experiments with found sound to multi-layered works for groups ranging from chamber ensembles to full orchestras, and from two-track tape to multiple-channel video operas in collaboration with Beryl Korot. The single disc release of Four Organs, Eight Lines, and New York Counterpoint demonstrates the composer at an early stage of his career, who has since remained faithful to his style while evolving into one of the most respected and accomplished composers working today.

All compositions by Steve Reich 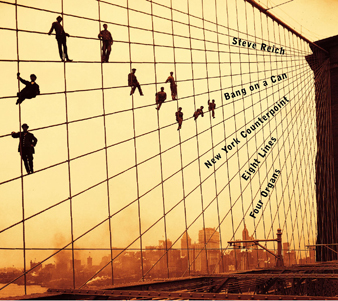