"Beautifully poised throughout," says the BBC, "Double Sextet stands as arguably one of Reich’s finest works." The Pulitzer Prize–winning piece, performed here by eighth blackbird, has been cited as "among the finest pieces of our time" by the Philadelphia Inquirer. Also on the album, Bang on a Can perform 2x5, which Gramophone calls "Reich’s smartest, most sonically nourishing recording for years."

Nonesuch released an album with two Steve Reich compositions—Double Sextet and 2x5—on September 14, 2010. Double Sextet—which won the Pulitzer Prize in 2009—is performed by eighth blackbird, who commissioned the piece. "Beautifully poised throughout," says the BBC, "Double Sextet stands as arguably one of Reich’s finest works." The Philadelphia Inquirer places it "among the finest pieces of our time … more than earlier Reich, it tips from exaltation to menace on a dime.” Bang on a Can perform 2x5, which premiered last summer at a velodrome in Manchester, England. The work shared a double bill with German electronic music pioneers Kraftwerk and was commissioned by MIF in association with Casa da Música (Porto).

Double Sextet comprises two identical sextets of flute, clarinet, vibraphone, piano, violin, and cello. Doubling the instrumentation was done so that, as in so many of Reich’s earlier works, two identical instruments could interlock to produce one overall pattern. The composer says, “For example, in this piece you will hear the pianos and vibes interlocking in a highly rhythmic way to drive the rest of the ensemble.” The piece can be played in two ways: with 12 musicians, or with six playing against a recording of themselves.

Reich continues, “The idea of a single player playing against a recording of themselves goes all the way back to Violin Phase of 1967. The expansion of this idea to an entire chamber ensemble playing against pre-recordings of itself begins with Different Trains (1988). By doubling an entire chamber ensemble, one creates the possibility for multiple simultaneous contrapuntal webs of identical instruments.”

In 2x5, Reich expands his palate with rock instrumentation. Scored for two sets of five instruments (hence “2x5”), this 21-minute piece calls for a total of ten musicians: four electric guitars, two pianos, two bass guitars, and two drum sets. Performers can either play the piece all-live with ten musicians or with five live musicians against a pre-recorded tape, as Bang on a Can did for the premiere on the opening night of the Manchester International Festival.

“Clearly 2x5 is not rock and roll, but uses the same instruments. It’s an example of the essential difference between ‘classical music’ and ‘popular music.’ And that essential difference is: one is notated, and the other is not notated,” Reich says. “I had to find musicians who (A), could read, and (B), had a genuine rock feeling, and there Bang on a Can excels.”

Design by John Gall
Cover Painting by Jasper Johns: 0 – 9, 1959, encaustic and collage on canvas, 20 1/8” x 35”, from the collection of the Peter and Irene Ludwig Foundation.
Photograph of Steve Reich by Jeffrey Herman

This recording was made possible, in part, by support from The Aaron Copland Fund for Music Recording Program.

Double Sextet was commissioned by eighth blackbird through the support of the Carnegie Hall Corporation, the Abe Fortas Memorial Fund of the John F. Kennedy Center for the Performing Arts, Liverpool Culture Company – European Capital of Culture 2008, the Modlin Center for the Arts at the University of Richmond, Orange County Performing Arts Center, and the University of Cincinnati College-Conservatory of Music – Music 08 Festival.

2x5 was commissioned by the Manchester International Festival in association with Casa da Música (Porto). 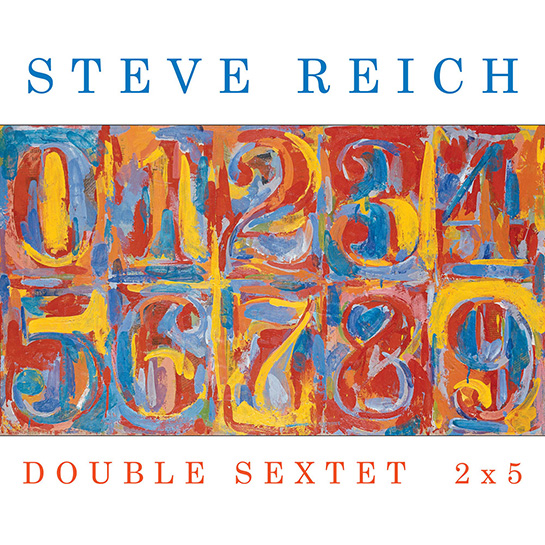