Runner / Music for Ensemble and Orchestra

These first recordings of Steve Reich’s Runner (2016) and Music for Ensemble and Orchestra (2018) are performed by the Los Angeles Philharmonic, conducted by Susanna Mälkki. The New York Times calls Runner “a calmly luminous orchestral piece with the pulsating, propulsive rhythms that animate much of Mr. Reich’s music.” The San Francisco Chronicle says that Music for Ensemble and Orchestra “is a beautiful and dramatically charged masterpiece, but its impact goes even further than that.”

Nonesuch Records released the first recordings of Steve Reich’s Runner (2016) and Music for Ensemble and Orchestra (2018), performed by the Los Angeles Philharmonic and conducted by Susanna Mälkki, available digitally and on CD on September 30, 2022; a vinyl LP version was released on December 2.

Reich says Runner is written “for a large ensemble of winds, percussion, pianos, and strings. While the tempo remains more or less constant, there are five movements, played without pause, that are based on different note durations. First, even sixteenths, then irregularly accented eighths, then a very slowed-down version of the standard bell pattern from Ghana in quarters, fourth a return to the irregularly accented eighths, and finally a return to the sixteenths but now played as pulses by the winds for as long as a breath will comfortably sustain them. The title was suggested by the rapid opening and my awareness that, like a runner, I would have to pace the piece to reach a successful conclusion.”

“Music for Ensemble and Orchestra is an extension of the Baroque concerto grosso where there is more than one soloist,” the composer continues. “Here there are twenty soloists—all regular members of the orchestra, including the first stand strings and winds, as well as two vibraphones and two pianos. The piece is in five movements, though the tempo never changes, only the note value of the constant pulse in the pianos. Thus, an arch form: sixteenths, eighths, quarters, eighths, sixteenths. Music for Ensemble and Orchestra is modeled on my Runner, which has the same five movement form.”

Nonesuch has recorded every new piece of music by Steve Reich since 1985, beginning with The Desert Music and continuing through 2018’s Pulse/Quartet, resulting in twenty-two albums and the two box sets Phases in 2006 and Works: 1965-1995 in 1997. Most recently, the label released his Reich/Richter, performed by Ensemble intercontemporain and conducted by George Jackson, in June 2022. The Times (London) said, “What a delight … to be able to focus … on the music, delivered here with a clever mix of pinprick precision and reverberant haze by 14 members of … Ensemble Intercontemporain … The more intently you listen, the more subtleties emerge among the shifting, criss-crossing textures and phrases, sometimes coloured with gentle melancholy ... but decisively upbeat by the end. Reich/Richter is an ear-tickling tonic and a happy companion to Reich’s … newly published book, Conversations.” Nonesuch will put out a collection of Reich’s complete works in 2023.

Reich released a book earlier this year, Conversations, that includes dialogues with past collaborators, fellow composers, musicians, and visual artists who have been influenced by his work, including: David Lang, Brian Eno, Richard Serra, Michael Gordon, Michael Tilson Thomas, Russell Hartenberger, Robert Hurwitz, Stephen Sondheim, Jonny Greenwood, David Harrington, Elizabeth Lim-Dutton, David Robertson, Micaela Haslam, Anne Teresa de Keersmaeker, Julia Wolfe, Nico Muhly, Beryl Korot, Colin Currie, and Brad Lubman. The Wall Street Journal called the book “a testament to the influence of an idea—one that triggered a cultural turning point,” and the New York Times said, “The joy of the book is to hear artists from a variety of disciplines and backgrounds ... rhapsodizing about their relationship to Reich’s music and how it influenced their own creative processes.”

Steve Reich has been called “America’s greatest living composer” (Village Voice), “the most original musical thinker of our time” (New Yorker), and “among the great composers of the century” (New York Times). His music has influenced composers and mainstream musicians all over the world. Music for 18 Musicians and Different Trains have earned him two Grammy Awards, and in 2009, his Double Sextet won the Pulitzer Prize. Reich’s documentary video opera works—The Cave and Three Tales, done in collaboration with video artist Beryl Korot—have been performed on four continents. His recent work Quartet, for percussionist Colin Currie, sold out two consecutive concerts at Queen Elizabeth Hall in London shortly after tens of thousands at the Glastonbury Festival heard Jonny Greenwood (of Radiohead) perform Electric Counterpoint followed by the London Sinfonietta performing his Music for 18 Musicians.

In 2012, Reich was awarded the Gold Medal in Music by the American Academy of Arts and Letters. He has additionally received the Praemium Imperiale in Tokyo, the Polar Music Prize in Stockholm, the BBVA Award in Madrid, and the Golden Lion at the Venice Biennale. He has been named Commandeur de l’Ordre des Arts et des Lettres and has been awarded honorary doctorates by the Royal College of Music in London, The Juilliard School, and the Liszt Academy in Budapest, among others. “There’s just a handful of living composers who can legitimately claim to have altered the direction of musical history and Steve Reich is one of them,” states the Guardian.

Redefining what an orchestra can be, the Los Angeles Philharmonic (LA Phil) is as vibrant as Los Angeles, one of the world's most open and dynamic cities. Led by Music & Artistic Director Gustavo Dudamel, this internationally renowned orchestra harnesses the transformative power of live music to build community, foster intellectual and artistic growth, and nurture the creative spirit. This is the third recent recording by the orchestra on the label; the others were the Louis Andriessen pieces The only one and Theatre of the World. Additionally, the Los Angeles Philharmonic’s recordings of The Gospel According to the Other Mary and Must the Devil Have All the Good Tunes?, with Yuja Wang, released on Deutsche Grammophon, are included in this year’s John Adams Collected Works boxed set. Nonesuch also released an LA Phil recording of Adams's Naïve and Sentimental Music in 2002.

Susanna Mälkki is sought-after at the highest level by symphony orchestras and opera houses worldwide. About to embark on her final season as Chief Conductor of the Helsinki Philharmonic Orchestra, she concludes a seven-year tenure with a distinctive dynamism and imaginative flair to her programming. In addition to a full season in Finland, she will lead the Helsinki orchestra on tour to the prestigious Lucerne and Edinburgh festivals, New York’s Carnegie Hall, and Washington’s Kennedy Centre this season. 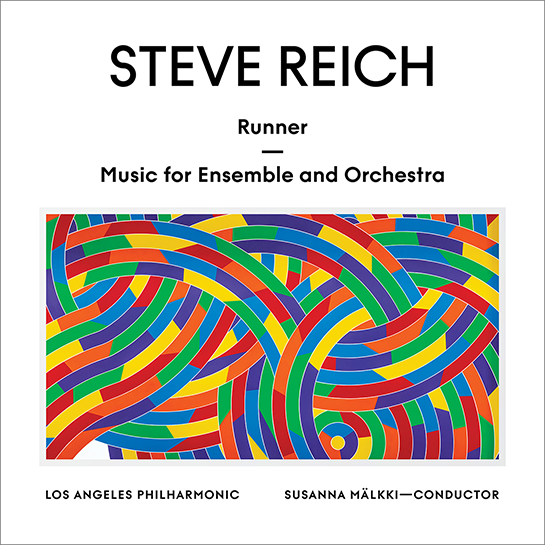