This ambitious work was provoked by German poet Friedrich Schiller’s essay on conscious vs. unconscious impulses in art and is dedicated to composer-conductor Esa-Pekka Salonen, who leads the Los Angeles Philharmonic on this recording. The Los Angeles Times calls it “compelling, original, and assured ... Adams’s most ambitious orchestral score.” The San Francisco Chronicle includes it among the best orchestral compositions of the past 50 years, calling it a "bracing and beautiful essay, part philosophical treatise and part Dickensian adventure."

John Adams’s Naive and Sentimental Music, an orchestral work of nearly 50 minutes, is his most ambitious symphonic work to date. Premiered and recorded by the Los Angeles Philharmonic under the direction of Esa-Pekka Salonen, to whom the piece is dedicated, the work has subsequently been performed to great critical acclaim in New York, Chicago, Boston, and Cleveland, and throughout Europe.

Taking its title from the German poet Friedrich Schiller, Adams's Naive and Sentimental Music has been called “ultimately personal, intimate … an epic in which individual stories peek through the onrush of history” (Los Angeles Times) and “a maximal tour de force that proves how far [Adams] has moved from his minimalist roots” (Chicago Tribune). The San Francisco Chronicle includes it among the best orchestral compositions of the past 50 years, calling it a "bracing and beautiful essay, part philosophical treatise and part Dickensian adventure." The piece also takes its lead from the Schiller work, which examines the relationship between two different artistic personalities, one that creates in an un-self-conscious way, and one that tends to analyze itself as it creates. Adams has articulated his attempt to let the former aspect of his own nature “play freely” in this new work.

Following on the heels of a three-day, eight-concert retrospective of Adams’s music at the BBC Festival in London earlier in 2002, which showcased nearly all of his most significant works, Naive and Sentimental Music came at a time of an unprecedented degree of recognition for the composer both in the US and Europe.

Naive and Sentimental Music was commissioned by the Los Angeles Philharmonic, the Ensemble Modern Orchestra, the Vancouver Symphony and the Sydney Symphony. 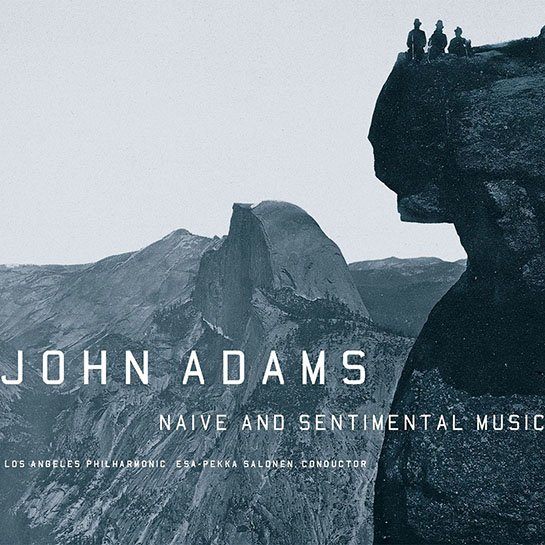