The debut album from the electric duo of Brad Mehldau and Mark Guiliana, Mehliana: Taming the Dragon, features Mehldau on Fender Rhodes and synthesizers and Guiliana on drums and effects. Mehliana comprises 12 original tunes—six written by the duo and six written by Mehldau—and was engineered and mixed by Greg Koller (Jon Brion, Kanye West). Jazzwise calls it "astonishing ... one of the best albums of 2014."

Nonesuch Records releases the debut album from the electric duo of Brad Mehldau and Mark Guiliana, Mehliana: Taming the Dragon, on February 25, 2014. The two have been performing for several years, including a brief US tour this fall, with Mehldau playing Fender Rhodes and synthesizers and Guiliana on drums and effects, as they are on the record. Mehliana comprises 12 original tunes—six written by the duo and six written by Mehldau—and was engineered and mixed by Greg Koller (Jon Brion, Kanye West).

Brad Mehldau played in a number of different ensembles, including label mate Joshua Redman’s quartet, before becoming a bandleader himself in the 1990s. The Brad Mehldau Trio, which tours the world extensively, made eight acclaimed recordings for Warner Bros., including the five widely praised Art of the Trio albums with former drummer Jorge Rossy (released as a boxed set by Nonesuch in 2011). The pianist’s nine years with Nonesuch have been equally productive, beginning with the solo disc Live in Tokyo and including six trio records Day is Done, House on Hill, Live, Ode, and Where Do You Start, as well as a collaboration with soprano Renée Fleming, Love Sublime; a chamber ensemble album, Highway Rider; two collaborations with label mate Pat Metheny, Metheny Mehldau and Quartet, the latter of which also includes Trio members Jeff Ballard and Larry Grenadier; a CD/DVD set of live solo performances, Live in Marciac; and collaborations with genre-crossing musicians on Modern Music, with composer/pianist Kevin Hays and composer/arranger Patrick Zimmerli. Additionally, he produced saxophonist Joshua Redman’s 2013 release Walking Shadows.

According to Modern Drummer, Mark Guiliana is “at the forefront of an exciting new style of drumming.” The New Jersey native’s unique and un-compromised approach to playing the drums has earned him international acclaim as both a leader and a sideman. In 2004, Guiliana created HEERNT, an “experimental-garage-jazz” trio based in New York. The band’s debut record, Locked in a Basement, was called the record “the most exuberant, dramatic, beautiful, sassy, genre-busting little outing that I've heard since I don't know when” by legendary drummer Bill Bruford (Yes, King Crimson). As a sideman, Guiliana’s longest partnership has been with world-renowned jazz bassist Avishai Cohen. He toured all over the world with Cohen from 2003 until 2008, performing on six studio records and a live DVD recorded at the Blue Note in Manhattan. Guiliana has also recorded and/or performed with Meshell Ndegeocello, Dhafer Youssef, Wayne Krantz, Matisyahu, Jazz Mandolin Project, Jason Lindner, Brad Shepik, Bobby McFerrin, Tigran Hamasyan, and many more. His debut solo record, Beat Music, which was co-produced by Ndegeocello, was released in the spring of 2013. Guiliana plays Gretsch drums, Sabian cymbals, Vic Firth sticks, and Evans drumheads.

Art and Layout by Dima Drjuchin
Photograph by Brantley Gutierrez 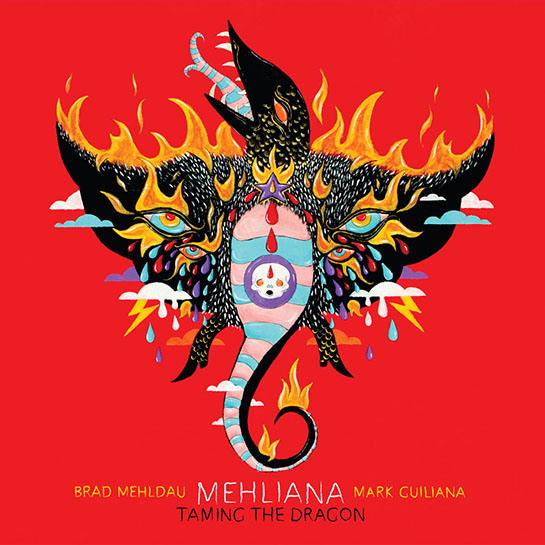