A collaboration between pianists Brad Mehldau and Kevin Hays and composer/arranger Patrick Zimmerli, all longtime friends, Modern Music features pieces written by each of the three musicians as well as works by Steve Reich, Ornette Coleman, and Philip Glass, performed by the two pianists in arrangements by Zimmerli. The Guardian calls it a "fascinating session" that's "full of surprises." The New York Times says the pianists bring "a high sheen to some choice material."

Nonesuch Records releases Modern Music, a collaboration between pianists Brad Mehldau and Kevin Hays and composer/arranger Patrick Zimmerli, on September 20, 2011. The album features pieces written by each of the three musicians as well as works by Steve Reich, Ornette Coleman, and Philip Glass, performed by the two pianists in arrangements by Zimmerli.

This collaboration grew out of the long-standing desire of Mehldau and Hays, friends and colleagues since they both arrived on New York’s jazz scene in the late 1980s, to work together. Both musicians initially came to prominence with stints in early-1990s lineups of Joshua Redman’s quartet before launching successful careers as solo performers and band leaders.

Zimmerli, a mutual old friend, grew up in West Hartford, CT, playing saxophone in the same high school jazz program as Mehldau, who was two years younger. He knew Hays, also a Connecticut native, through music competitions. Zimmerli went on to study composition and has had great success in the contemporary-classical world. Brought into the collaboration as producer, he became the catalyst for the Modern Music sessions, offering repertoire ideas and presenting creative challenges that took Hays and Mehldau well out of their familiar turf.

After moving back east to upstate New York from New Mexico, Hays “dragged an electric piano over to Brad’s house, and we just gave it a go,” as he says. “The project kind of started there.” Among the 20th-century works Zimmerli suggested were Steve Reich’s Music for 18 Musicians and Philip Glass’s String Quartet No. 5.

Additionally, Zimmerli explains, “We had always planned to include a jazz standard, and after some discussion we decided on Lonely Woman, a tune I’ve always loved, and one for which I had an idea for a big, piano-spanning 20-note-chord approach to the melody. I worked in some minimalist-like motifs in the blowing to keep the arrangement in the spirit of what’s around it.

“We also wanted one original piece each, so I wrote Modern Music, and Brad and Kevin both chipped in preexisting pieces, Unrequited and Elegia, both beautiful melodies with lovely chord changes,” he continues. Three more originals by Zimmerli would eventually be added: Crazy Quilt, Generatrix, and Celtic Folk Melody.

Hays adds, “Patrick’s music is highly structured; the solos are generally a set length, but we opened it up a little.  The development comes more through improvisation on Brad’s piece and mine; they’re more like lead sheets.”

Mehldau agrees: “The improvisation was often not in our comfort zone—that is to say, usually, when a jazz musician improvises, he is working intuitively, allowing his intellect to be suspended for a while. This project was different, because Pat set up some unique challenges for us. One example among many: On Modern Music there’s a part that calls for us to improvise in the right hand while playing something written in the left hand. Sounds easy enough on paper, but it proved a real challenge for both of us.”

Zimmerli suggested a recording location with excellent acoustics—Mechanics Hall in Worcester, MA—where they recorded Modern Music last fall. Selections from the album were included in a spring 2011 program, Brad Mehldau and Friends, at Zankel Hall as part of Mehldau’s Carnegie Hall residency. 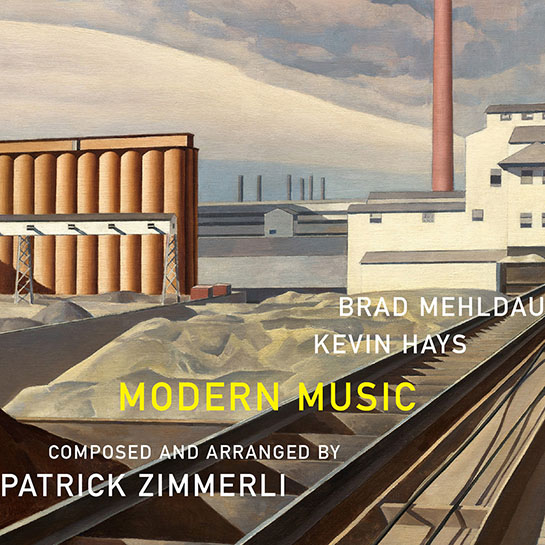