Your Mother Should Know: Brad Mehldau Plays The Beatles

Brad Mehldau’s live solo album Your Mother Should Know: Brad Mehldau Plays The Beatles features interpretations of nine songs by John Lennon and Paul McCartney and one by George Harrison. Although other Beatles songs have long been staples of Mehldau’s shows, he had not previously recorded any of these tunes. The album, recorded in September 2020 at Philharmonie de Paris, ends with a David Bowie classic that draws a connection between The Beatles and pop songwriters who followed.

Brad Mehldau's Your Mother Should Know: Brad Mehldau Plays The Beatles is due February 10, 2023, on Nonesuch Records. The live solo album features the pianist and composer’s interpretations of nine songs by John Lennon and Paul McCartney and one by George Harrison. Although other Beatles songs have long been staples of Mehldau’s solo and trio shows, he had not previously recorded any of the tunes on Your Mother Should Know. The album ends with a David Bowie classic that draws a connection between The Beatles and pop songwriters who followed. Your Mother Should Know was recorded in September 2020 at Philharmonie de Paris.

A live performance video of the title track, recorded at New York City’s legendary Village Vanguard, may be seen here:

Here the performance is preceded by an introduction by the pianist:

“There is an undisputed universality to The Beatles,” Mehldau says. “Their music cuts across cultural and generational lines, as new listeners continue to discover it. There is an immediacy and integrity to their songs that draws everyone in.

“When I was getting started at the instrument, The Beatles were not on my radar yet, but a lot of the enduring piano-pop music I heard on the radio grew out of them. That music became part of my personality, and when I discovered The Beatles later, it all tied together. Their music, and its wide influence on other artists, continues to inform what I do.”

Mehldau further considers, “In his book The Western Canon, Harold Bloom confronted the question of what makes particular books endure: ‘The answer, more often than not, has turned out to be strangeness, a mode of originality that either cannot be assimilated, or that so assimilates us that we cease to see it as strange.’

“If we look at The Beatles and the multitude of artists who have been influenced by one or another facet of their oeuvre, this paradoxical recipe for longevity is one way to consider their ongoing footprint,” Mehldau continues. “For there is a good deal of strangeness to much of their music, particularly in the series of game-changing albums that begin with Rubber Soul through the release of their final record, Let It Be.”

Brad Mehldau’s Nonesuch debut was the 2004 solo disc Live in Tokyo. His subsequent eighteen releases on the label include six records with his trio as well as collaborative and solo albums. His most recent releases are a pair of recordings with the original 1990s Joshua Redman Quartet, RoundAgain (2020) and LongGone (2022); Variations on a Melancholy Theme (2021), commissioned by and recorded with Orpheus Chamber Orchestra; a solo album he recorded during COVID-19 lockdown, Suite: April 2020; and Jacob’s Ladder (2022), which featured music that reflects on scripture and the search for God through music and was inspired by the prog rock Mehldau loved as a young adolescent. On March 15, 2023, Equinox Publishing will publish Mehldau’s memoir Formation: Building a Personal Canon, Part I, a rare look inside the mind of an artist at the top of his field, in his own words. 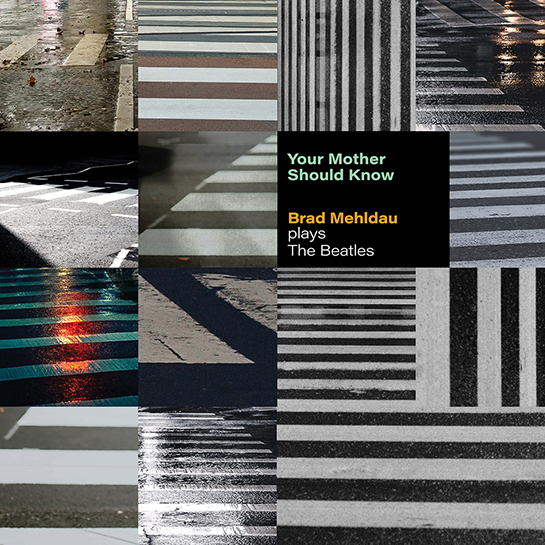