Jazz greats Dave Holland (bass) and Elvin Jones (drums) join the guitarist-composer for this set of Frisell originals, plus a pair of standards. They complement “the guitarist's offbeat charm and unerring taste,” says Billboard, “with their muscular authority.”

For his 15th Nonesuch release, Bill Frisell has teamed up with two of the most revered figures in contemporary jazz, bassist Dave Holland and drummer Elvin Jones, for the first time on record. An impromptu meeting of these three unique voices resulted in instant musical chemistry, as they revisited—and often transformed—Frisell’s compositions and a pair of standards.

According to Frisell, co-producer Michael Shrieve—a former member of Santana and a highly creative drummer with whom Frisell has worked—first suggested playing with Jones. “Michael has known Elvin since he was a little kid,” Frisell explains, “and is currently writing a book about him. Out of the blue he told me that I should play with Elvin. I had met Elvin once, about 15 years ago, but I never thought I’d get a chance to play with him.”

Seeing that Shrieve was perfectly serious about the suggestion, Frisell and co-producer Lee Townsend quickly decided on the right bassist for the project. “I had played a little bit with Dave,” Frisell says, “and we’d talked about doing more work together. And Dave had worked with Elvin, so I thought he might be able to tie it all together. The whole thing was like a dream, to be able to play with these guys.”

Each of Frisell’s collaborators on the eponymously titled release can rightfully claim the tag “legendary.” British-born bassist Dave Holland was a mainstay in Miles Davis’s bands immediately prior to and during the Bitches Brew era, and also worked in more avant-garde settings with Chick Corea and Anthony Braxton. In recent years Holland has become one of the most celebrated composers and bandleaders in jazz.

Born in Pontiac and raised in Detroit as part of an enormously gifted musical family, Elvin Jones became one of the most popular and influential drummers in jazz history through his work in the John Coltrane Quartet. He, too, has been a celebrated bandleader, and numerous younger musicians— including Nicholas Payton, Javon Jackson, and Ravi Coltrane—have received their bandstand seasoning as members of his Jazz Machine.

In selecting the tunes for the session, Frisell and Townsend picked some of his most enduring compositions, which were then transformed by the band in the studio. “I wanted to bring Dave and Elvin into my world,” Frisell said. “Strange Meeting,” originally a martial tango, is recast here as a breezy bossa nova. Bluesier material and a folk ballad by Stephen Foster, “Hard Times,” were also chosen because Frisell had always heard the blues in Jones’s playing. “I wasn’t sure how he would react,” Frisell says, “but Elvin got really excited about this stuff—he said that it took him back to the music he used to listen to as a kid in Detroit, like Big Bill Broonzy. And selfishly, if someone has a tune, who wouldn’t want to hear what it would sound like if Elvin Jones played it?” 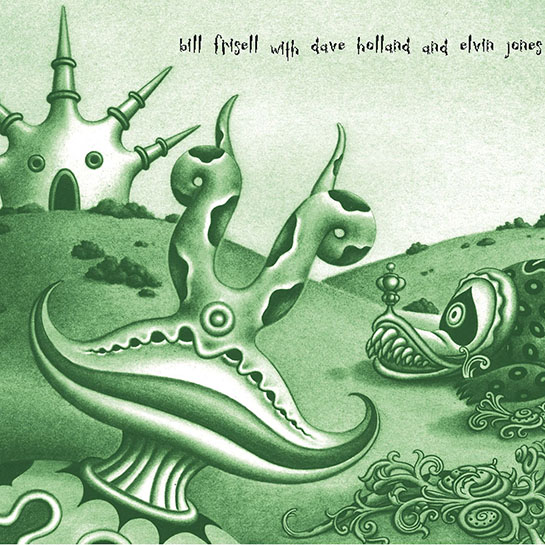