Music for the Films of Buster Keaton: Go West

“The most inventive and compelling guitarist to emerge in more than a decade” (Oakland Tribune), composer/guitarist/bandleader Bill Frisell trains his unique compositional lens on the silent film works of 1920s comedic phenom Buster Keaton, forging Music for the Films of Buster Keaton: Go West and The High Sign / One Week, two remarkable recordings representing the sixth and seventh additions to Frisell's Nonesuch catalog.

Music for the Films of Buster Keaton provides a deeper look at Frisell’s longstanding fascination with Americana (also explored in his earlier Nonesuch releases This Land and Have a Little Faith). In a musical storytelling of the rises, falls and comedic/tragic mishaps of Buster Keaton’s most memorable screen personae, the voice of Frisell’s signature guitar presides conversing, pondering, scheming over vignettes of fluctuating rhythms, tempos and moods, weaving the particular atmosphere of placid tumult so intrinsic to Keaton’s work and life. After a New York City performance accompanying the films, the New York Times said, “Mr. Frisell’s scores perfectly balance the need to be abstract and the need to be literal ... [He has] recurring motifs that suggest the new American possibility of the time, motifs redolent of the sort of optimism heard in some country music, blues and jazz.”

Both Go West and The High Sign / One Week feature the Bill Frisell band, a tightly knit trio in which longtime collaborators Kermit Driscoll (bass) and Joey Baron (drums) flank Frisell’s inimitable fretwork, exhibiting a level of communication for which Frisell’s ensembles are renowned. Formed in 1986, the band often conspired with such notable talents as clarinetist Don Byron, trombonist Curtis Fowlkes, and accordionist Guy Klucevsek, among others. 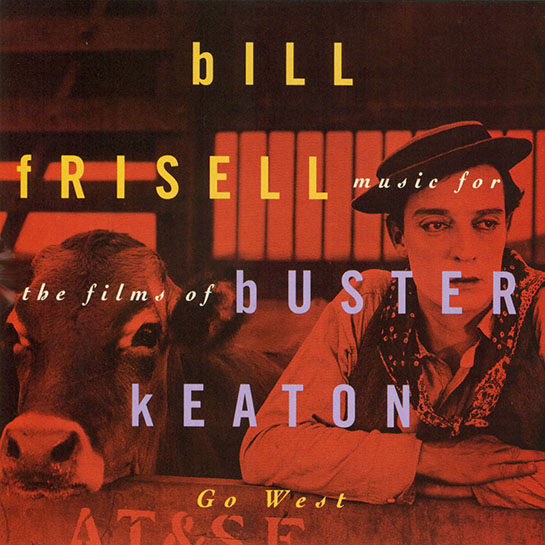