Working in a trio with legendary drummer Jim Keltner (Ry Cooder, John Hiatt) and Nashville bassist Viktor Krauss was, for Frisell, “a dream project come true.” The New York Times called the 1998 recording his “simplest and best recording in years.”

Guitarist, composer, and bandleader Bill Frisell, an artist who has been called, “the most significant and widely imitated guitarist to emerge in jazz since the beginning of the 1980s” (New York Times), has been widely acknowledged for his restless eclecticism. He moves in yet another musical direction with Gone, Just Like a Train. Recorded in Burbank in 1997, it features Frisell with renowned drummer Jim Keltner and bassist Viktor Krauss in a jam-oriented rock-inflected set that reflects the wide emotional range of Frisell’s compositions.

Frisell first became aware of Jim Keltner when he heard John Hiatt’s record Bring the Family, with Ry Cooder and Nick Lowe. He was immediately fascinated by the recording and by Keltner’s playing and made an arrangement of Hiatt’s “Have a Little Faith in Me,” from which his 1994 Nonesuch recording Have a Little Faith takes its name. In recounting this first collaboration with Keltner, Frisell said, “He’s one of the most inventive, good-feeling, creative, humble, giving, soulful musicians I’ve ever played with.”

Frisell’s collaboration with Viktor Krauss began on his 1997 record Nashville, which MUSICIAN called, “among the earthiest and most deeply felt of Frisell’s many fine recordings.” The guitarist contacted Krauss, who has worked as Lyle Lovett’s exclusive bass player, at the very last minute for those sessions. Frisell later said: “I can’t imagine what might (or might not) have happened if he hadn’t been there. He turned out to be the magic glue that held everything together.” This, and the fact that Krauss is also a big Keltner fan, meant he “had to be the guy” for the new record.

Bill Frisell calls Gone, Just Like a Train “a dream project come true.” He says that Keltner and Krauss "have a lot going on under the surface. Things aren’t always what they seem. Paradox. What I love about music is what cannot be explained. Mystery. These guys have it.”

All compositions by Bill Frisell 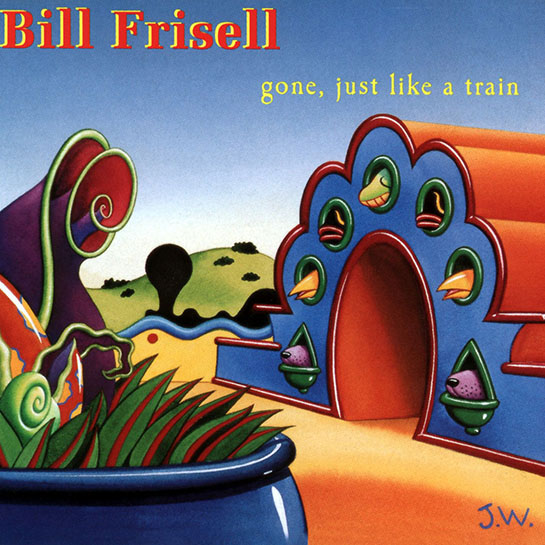