The mechanized sound of 1920s piano rolls inspired this concerto, performed by the Cleveland Orchestra and soloist Emanuel Ax, who, says the New York Times, “play it with vitality and excitement.” Included are the lighthearted Lollapalooza and Slonimsky’s Earbox.

Century Rolls, commissioned by the Cleveland Orchestra at Emanuel Ax’s request, is John Adams’s first piano concerto, completed in 1996 and premiered in London in 1998. He found inspiration for this piece listening late one night to 1920s piano roll music. Adams was struck by the way the rolls made their mark on the musical content—altering its essence in a way that tape-recording didn’t do—as well as that bright, mechanically rhythmic edginess that the process imparted to the notes. The 30-minute piece, heard here in its first recording by Ax and the Cleveland Orchestra, is a work in which orchestra and soloist become a bustling rhythmic machine that demands nothing short of sheer athletic prowess from all its musicians. With a headlong energy broken only in the second movement by a slow gymnopédie in 3/4 time (“Manny’s Gym”), Century Rolls is a wild ride for performer and audience alike.

Rounding out the disc are two recent recordings first released as part of The John Adams Earbox, a 10-CD compendium of the composer’s recorded output issued by Nonesuch in 1999. Lollapalooza was written as a 40th birthday present for conductor Simon Rattle, a friend and advocate of the composer. The internal rhythm of the word itself is spelled out in the motivic horn writing and is meant to be as oversized, outlandish, and unrefined as the word suggests. Slonimsky’s Earbox is a tribute to the legendary Russian musicologist and wit Nicolas Slonimsky—its scales and modes a memorial to his hyper-energetic personality.

All music composed by John Adams 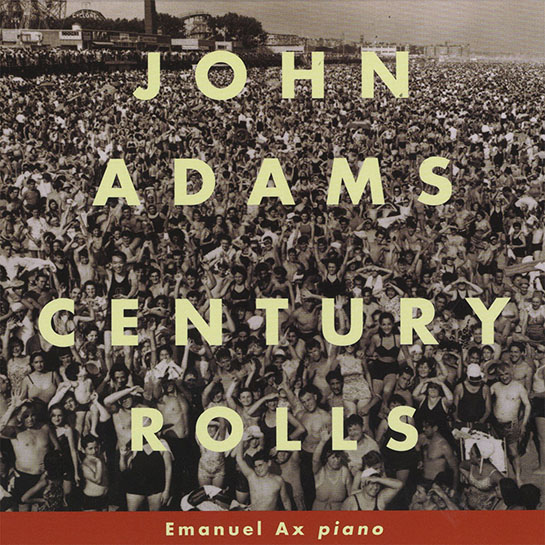