Adams's Son of Chamber Symphony, deemed "dangerously exhilarating" by the Financial Times, is performed here by the International Contemporary Ensemble (ICE), led by Adams. It is paired on the album with his String Quartet, which the Philadelphia Inquirer calls "a knockout," performed by the St. Lawrence String Quartet, the ensemble for which the piece was written.

“As you might imagine, Son of Chamber Symphony is closely related to Chamber Symphony,” Adams recently explained in an interview for the London Sinfonietta. “The two are very similar in instrumentation: 15 players—a large chamber group, or a very small orchestra—which means everybody gets to be a soloist in one way or another. It gave me an opportunity to do the kind of challenging virtuoso writing that I would never attempt with a large orchestra. The new chamber symphony also has the same buoyant quality [as the original].” The piece was co-commissioned by the San Francisco Ballet for a new work by choreographer Mark Morris, entitled Joyride, which premiered in 2008.

String Quartet is Adams’ second full-sized work for that combination of instruments. His first, 1994’s John’s Book of Alleged Dances (Nonesuch, 1998), is a set of 11 short pieces written for Kronos Quartet. Hearing the St. Lawrence String Quartet perform that work inspired Adams to compose String Quartet for them, which led to its world premiere at The Juilliard School in 2009. Since then, the group has performed the work more than 50 times throughout North America, Europe, and New Zealand, including a critically acclaimed performance at Carnegie Hall’s Zankel Hall in March 2011. The Philadelphia Inquirer said of one of those concerts, “The piece is a knockout. Thanks to the St. Lawrence telepathic sense of ensemble, so was the performance.”

With a flexible roster of 33 leading instrumentalists performing in forces ranging from solos to large ensembles, the International Contemporary Ensemble (ICE) functions as performer, presenter, and educator, advancing the music of our time and pursuing groundbreaking strategies for audience engagement. Since its founding in 2001, ICE has premiered more than 500 compositions, the bulk of them by emerging composers, in venues ranging from New York’s Lincoln Center and Chicago’s Museum of Contemporary Art to galleries, bars, clubs, and schools around the world.

Established in 1989, the St. Lawrence String Quartet (SLSQ) has developed a reputation as a world-class chamber ensemble. The quartet performs more than 120 concerts annually worldwide and calls Stanford University, where the group is ensemble-in-residence, home. The SLSQ is committed to the great, established quartet literature and also champions new works by composers like John Adams, Osvaldo Golijov, Eziquiel Vinao, and Jonathan Berger. The quartet comprises founding members Lesley Robertson (viola) and Geoff Nuttall (violin); cellist Christopher Costanza, who joined the group in 2003; and violinist Scott St. John, who joined in 2006.

Son of Chamber Symphony was commissioned by Stanford Lively Arts in honor of the Bonnie J. Addario Lung Cancer Foundation during Lung Cancer Awareness Month, November 2007, with generous support from Van and Eddi Van Auken, and by The Carnegie Hall Corporation, and made possible in part by The Swanson Foundation in honor of San Francisco Ballet’s 75th Anniversary. It was choreographed as Joyride for the San Francisco Ballet by Mark Morris. Its world premiere was November 30, 2007, by Alarm Will Sound (Alan Pierson, conductor), at Dinkelspiel Auditorium, Stanford University. Son of Chamber Symphony is dedicated to Ara Guzelimian. 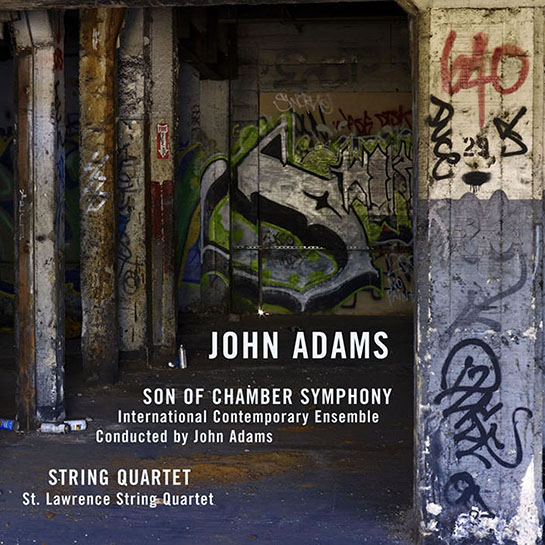