The Grammy-winning original cast recording of Nixon in China, first released in 1988, "has an eloquence not since matched," says the Los Angeles Times. This reissue, released to coincide with the opera's February 2011 Met premiere, includes the original, composer-supervised recording on three CDs, plus a 68-page booklet with new notes by Adams and director Peter Sellars, along with the original liner notes by librettist Alice Goodman and by Michael Steinberg, which the Times called "a revelation."

The Grammy-winning original cast recording, first released on April 15, 1988, "has an eloquence not since matched," says Los Angeles Times music critic Mark Swed. This reissue, released February 1, 2011, to coincide with the Metropolitan Opera premiere of Nixon in China, includes the original, composer-supervised recording on three CDs, plus a 68-page booklet with new notes by Adams and director Peter Sellars, along with the original liner notes by librettist Alice Goodman and by Michael Steinberg, which Swed called "a revelation."

DR. HENRY KISSINGER, National Security Adviser to the Nixon Administration, took little part in the public ceremonies of the 1972 China visit, His role was largely behind the scenes, negotiating the terms of the visit and the wording of the Shanghai Communiqué, a role he approached as (in Richard Nixon’s words) “a brilliant geopolitical thinker of the first rank.”

RICHARD M. NIXON, President of the United States from 1969 to 1974, spent the latter years of the Second World War as a naval lieutenant in the South Pacific. There he perfected his poker game, opened a hamburger stand where homesick American pilots and their crews could get a free burger and a soft drink, and wrote his wife a letter every day.

PAT NIXON, the First Lady, was widely reputed to dislike the political life. According to her husband, she would have preferred “to walk quietly along the edge of some deserted beach.” Whatever her private reservations, on the trip to China, as on all her other trips abroad, Mrs. Nixon became an ambassador of good will among the ordinary people of the country, and never stopped smiling.

CHIANG CH’ING: Madame Mao circulated so many stories about her background that it is difficult to be sure of the truth. As “Lan P’ing” she was an actress in Shanghai and aspired to work in films (later in life she confessed a partiality for Gone with the Wind and The Sound of Music). In her mid twenties she found her way to the Chinese Communist Party headquarters in Yenan and caught the roving eye of Mao Tse tung. Shortly thereafter she became his fourth wife. For fifteen years she lived quietly, but her revolutionary zeal and artistic ambitions increased, to culminate in the major role she played in the Cultural Revolution. She took command of an extreme left wing faction (with the notorious “Gang of Four”) and made the reform of Peking Opera her special mission. During the 1960s she produced five ideologically pure revolutionary ballets—among them The Red Detachment of Women—which occupied the Chinese stage for ten years.

MAO TSE TUNG: Chairman Mao was probably the closest thing to Plato’s Philosopher King that the world will ever see. He was a brilliant peasant autodidact who played up his thick Southern accent, spat, belched, and scratched himself. He wrote great poetry in the classic Chinese forms, and later banned those forms. In a country he had made puritan, he was an inveterate womanizer. His enemies destroyed one another; millions died who opposed his thought.

CHOU EN LAI: That the Premier is difficult to characterize would probably have pleased that elusive and self effacing man. He never sought supreme leadership, but for years held China’s administrative machinery together, and more than once prevented the country from falling into civil war. To Edgar Snow he was “chief reconciler and balancer of forces,” to Richard Nixon, “one of the most extraordinarily gifted people I have ever known, with an incandescent grasp of the realities of power.” Unlike Mao, he came from a Mandarin background; unlike Mao, he received at least part of his education outside China; but like Mao, he was a revolutionary from his earliest youth. If Mao was a Washington, Chou was a Lincoln; if Mao was a Napoleon, Chou was a Talleyrand. By the 1930s their relative positions were clear; by the mid ’30s Chou was China’s leading diplomatist, a role he was to maintain for forty years until his death. Laconic and yet eloquent, a man of irreproachable patriotism, Chou became, according to one memorial tribute (and there were many), “the very embodiment of the noble virtues of a proletarian revolutionary.” According to another, “for the people’s cause, he ate ‘grass’ but gave ‘milk’ and ‘blood’…Premier Chou never flinched or stopped advancing.”

Soprano TRUDY ELLEN CRANEY, a native of New Jersey, attended Mannes College in New York. Her recent operatic engagements include Konstanze with the Syracuse Opera, Lucia with the Connecticut Grand Opera, and Adina with the Chattanooga Opera. In Europe, she has sung on Italian and French television.

Mezzo MARION DRY, a graduate of Harvard and Northwestern Universities, has appeared with the Cleveland Orchestra and Hartford Symphony, as well as in a gamut of operatic roles from Purcell’s Dido to the Mother in The Consul. She teaches voice at Harvard.

Since his 1966 operatic debut with the Seattle Opera, tenor JOHN DUYKERS has appeared regularly with the San Francisco Opera and its affiliates, as well as with companies in Frankfurt, Freiburg, Geneva, and Santa Fe. He is also frequently heard in contemporary music theater works both in the United States and abroad. George Coates’s Duykers the First, with Duykers as Duykers, has been seen in Amsterdam, Bordeaux, Brussels, Lille, and San Francisco.

Mezzo STEPHANIE FRIEDMAN, a familiar presence on the California vocal scene, has sung with the San Francisco, San Jose, and Oakland Symphonies as well as in operas from Monteverdi to Britten. She was a soloist in the premiere of Roger Sessions’s When Lilacs Last in the Dooryard Bloom’d.

THOMAS HAMMONS studied the buffo repertoire with Italo Tajo at the Cincinnati Conservatory. He has since appeared in over thirty baritone roles from coast to coast with the San Francisco and Santa Fe Operas, among other companies.

Baritone JAMES MADDALENA is a founding member of the Naumburg-winning Liederkreis Ensemble, and has also sung with the National Symphony and St. Paul Chamber Orchestra. For Peter Sellars, in whose productions he regularly appears, he has been heard as Don Giovanni and Guglielmo. In Baroque repertoire, he has appeared in Craig Smith’s cantata series at Boston’s Emmanuel Church. His three recordings with Banchetto Musicale are of Handel, Haydn, and Telemann.

Mezzo MARI OPATZ, a native of Iowa, has toured Germany and Switzerland as Hansel, a role she has also sung in Chautauqua, Mobile, New York City, Pittsburgh, and Rochester. She has appeared as Suzuki in Madama Butterfly with the New York City Opera National Company, and as Cherubino in Chattanooga and as the Composer (in Ariadne auf Naxos) in Atlanta.

A graduate of the Curtis Institute, soprano CAROLANN PAGE has appeared with the Cleveland Orchestra, the Denver Symphony, the New Orleans Philharmonic, and the Philadelphia Orchestra. She was heard on Broadway as Cunegonde in the Harold Prince production of Candide. She has sung leading roles with the opera companies of Cincinnati, Cleveland, Kansas City, and Pittsburgh.

SANFORD SYLVAN, one of Boston’s most active vocalists, is a baritone of wide-ranging sympathies. He has sung Stravinsky with the San Francisco Symphony, Mahler with the Boston Symphony Chamber Players, and Barber and Ravel on tour with Music from Marlboro. For Peter Sellars, he has appeared as Handel’s Orlando and Alfonso in Così fan tutte, as well as in works by Bach, Peter Maxwell Davies, and Weill.

EDO DE WAART, born in Amsterdam in 1941, was co-principal oboe and assistant conductor of the Concertgebouw Orchestra before gaining international attention as founder and conductor of the Netherlands Wind Ensemble. He has since been music director of the Rotterdam Philharmonic, the San Francisco Symphony, and the Minnesota Orchestra. His programming innovations in San Francisco (1977–85) included annual commissions as well as the New and Unusual Music series. He has conducted opera at Bayreuth, Covent Garden, the Netherlands Opera, San Francisco (the complete Ring), and Santa Fe.

Founded in 1979 by artistic director Michael Feldman, the New York based ORCHESTRA OF ST. LUKE’S performs a diversified repertoire at Carnegie Hall, Lincoln Center, and the Brooklyn Academy of Music. It has been conducted James Levine, Julius Rudel, and Michael Tilson Thomas, and has accompanied Dame Janet Baker, Marilyn Horn, Yo Yo Ma, and Rudolf Serkin, as well as the dance companies of Pina Bausch, Mark Morris, and Twyla Tharp. 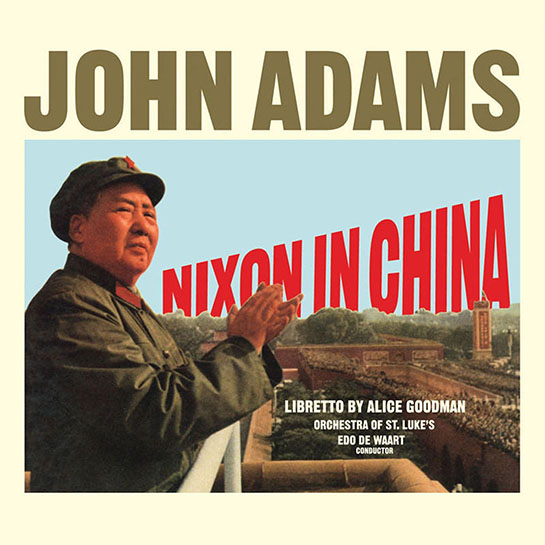