Gidon Kremer gives a “driven, high-energy performance” of John Adams’s Violin Concerto “that brings out both the work's dark beauty and its acerbic edge” (New York Times). “Shaker Loops,” says the Times, “has a searing, ominous quality that previous recordings have not captured.”

John Adams, America’s most frequently programmed composer, released the premiere recording of his acclaimed Violin Concerto in April 1996, featuring violinist Gidon Kremer and the London Symphony Orchestra led by Kent Nagano. The Violin Concerto, which was written in 1993 and received the Grawemeyer Award in 1995, is paired on this album with Shaker Loops, Adams’s popular string orchestra work in its first available recording conducted by the composer, with a performance by the Orchestra of St. Luke’s.

The Violin Concerto, deemed “electrifying music” by the Village Voice, signifies Adams’s return to a large-scale sweeping lyricism, presenting Kremer in a virtuosic trek through a landscape of changing atmospheres. Alternating furious passagework, a dreamlike second movement of variations, and a finale of kinetic wonder that volleys between soloist and tutti, the work is poised to captivate Adams fans and new Listeners alike.

A co-commission between the Minnesota Orchestra, the London Symphony Orchestra, and the New York City Ballet, the piece was premiered in January 1994 by soloist Jorla Fleezanis and the Minnesota Orchestra under the baton of Edo de Waart. Reviewing a performance last summer at Tanglewood’s Contemporary Music Festival with violinist Laura Parks and conductor Stefan Asbury, the Boston Globe described the Violin Concerto as having “the qualities of intelligence, craftsmanship and quirkiness that have always marked the composer and his work; this time Adams also mingles virtuoso show with soul, popular appeal with the staying power that comes from intellectual interest.”

Begun in 1977 as a piece for string quartet, Shaker Loops evolved as Adams experimented with different minimalistic techniques. It was quickly modified for septet, then revised for orchestra in 1983, and it continues to be one of his most performed pieces. Shaker Loops was first performed in the septet version in 1978 by members of the New Music Ensemble at the San Francisco Conservatory of Music. The version for string orchestra was first. heard in 1983 in a performance by the American Composers Orchestra conducted by Michael Tilson Thomas at New York City s Alice Tully Hall.

Adams says of the two pieces, “Beyond their stylistic earmarks, what links these two pieces most in my mind is their shared sense of untrussed virtuosity and physical energy They are both pieces about the act of playing a string instrument and specifically about a non-string player’s fascination with that art.” 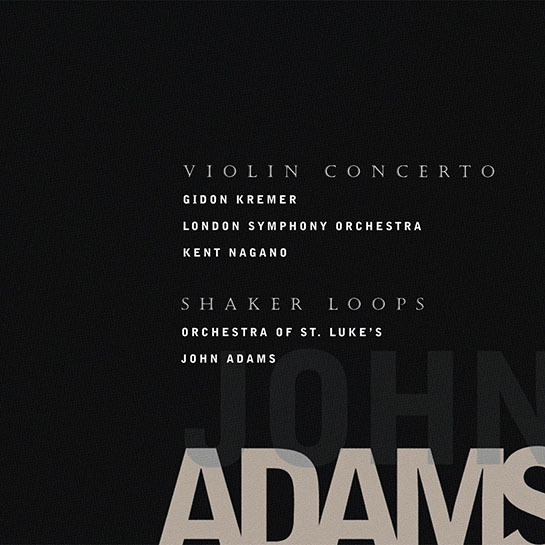