Nonesuch Records releases John Adams' Scheherazade.2 on September 30, 2016. The 50-minute work, which the composer, borrowing a term from Berlioz, calls a "dramatic symphony," was written for the violinist Leila Josefowicz, who has played it with leading orchestras around the world since its 2015 premiere by the New York Philharmonic. The Nonesuch recording was made during February 2016 performances by the St. Louis Symphony led by Music Director David Robertson; Chester Englander is the cimbalom soloist. It is available to pre-order now on iTunes and at nonesuch.com, where CD orders include a download of the complete album available starting on release day.

The composer was inspired by an exhibition at Paris' Institute du Monde Arabe that included the history and evolution of the "Arabian Nights" folk tales and was particularly struck by the story of Scheherazade. This led him to imagine a modern day Scheherazade, an "empowered, liberated spirit embodied in the multifaceted solo violin role." As he says in his liner note, "The casual brutality toward women that lies at the base of many of these tales prodded me to think about the many images of women oppressed or abused or violated that we see today in the news on a daily basis.

"Thinking about what a Scheherazade in our own time might be brought to mind some famous examples of women under threat for their lives, or women routinely attacked and even executed by religious fanatics in any number of countries," he continues. "The modern images that come to mind certainly aren't exclusive to the Middle East—we see examples, if not quite so graphic nonetheless profoundly disturbing, from everywhere in the world, including in our own country."

With this in mind, Adams created this dramatic symphony, with the solo violin portraying Scheherazade. "While not having an actual story line or plot, the symphony follows a set of provocative images: a beautiful young woman with grit and personal power; a pursuit by 'true believers;' a love scene that is both violent and tender; a scene in which she is tried by a court of religious zealots; and a final 'escape, flight, and sanctuary,'" he says. At the same time, notes the composer, "Scheherazade.2 is also a virtuoso romantic symphony-concerto on the grand scale which acknowledges its predecessors in works by Sibelius, Prokofiev, Bartók, and Berg.

The piece was composed specifically for Josefowicz, with whom Adams collaborated closely during its composition. The violinist, who is a passionate advocate of new music, has given numerous performances of Adams' works—notably his Violin Concerto; his electric violin concerto, The Dharma at Big Sur; and Road Movies, which she recorded for Nonesuch. "I find Leila a perfect embodiment of that kind of empowered strength and energy that a modern Scheherazade would possess," he says of his friend and colleague.

California–born David Robertson celebrates his 12th season as Music Director of the St. Louis (STL) Symphony, which was founded in 1880 and is the second-oldest orchestra in the U.S. During his tenure, Robertson has solidified the STL Symphony's standing as one of the nation's most vital and innovative ensembles. He is known as a champion of contemporary composers, as evidenced by the STL Symphony's strong association with John Adams. Robertson and the STL Symphony's last Nonesuch recording, of Adams' City Noir and Saxophone Concerto, won a 2014 Grammy Award. The label previously released their recording of his Doctor Atomic Symphony and Guide to Strange Places in 2009.

This recording was underwritten in part by New Music USA. 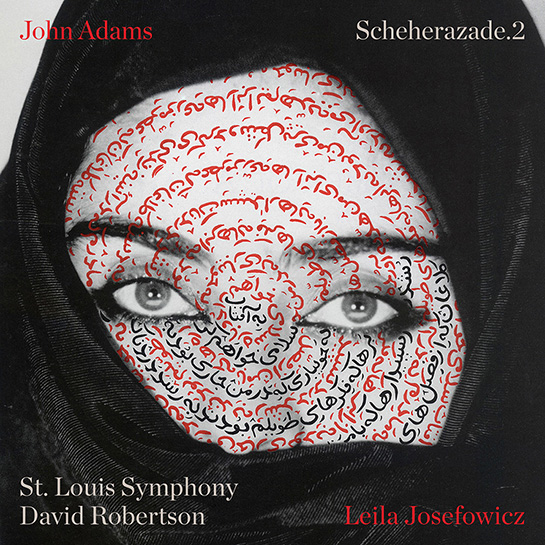