Adams’s “song play,” using the 1994 Northridge, California, earthquake as a starting point, explores race, gender, and immigration issues among young Angelenos. The Boston Globe regards it as some of “the most successful crossover music written in our time.”

Titled after a quote from a survivor of the 1994 Northridge, California, earthquake, John Adams’s I Was Looking at the Ceiling and Then I Saw the Sky, released October 30, 1998, on Nonesuch Records, is the composer’s third collaboration with director Peter Sellars. His previous two, Nixon in China and The Death of Klinghoffer, have been frequently staged and have brought worldwide attention to this visionary pairing. The Ceiling/Sky libretto was written by June Jordan, poet and much lauded essayist on African American culture.

Set in Los Angeles, the story focuses on the lives of seven characters that become intertwined on their journey toward love and self-discovery. The cast for the recording includes Audra McDonald, Marin Mazzie, Michael McElroy, Richard Muenz, Angela Teek, Darius De Haas, and Welly Yang. When a catastrophic earthquake occurs, they are forced to confront unavoidable truths and their lives become irrevocably changed. Rich in the sound and rhythms of American urban life, Jordan’s libretto makes a rippling counterpoint of several love stories against a background of misunderstanding, violence, idealism and ingenuity. The characters, all in their 20s, are a cross section of young Americans, including David, a handsome young Baptist minister; Consuelo, a single mother of two and an “illegal alien”; and the young LAPD cop, Mike, who is caught between the desire to help the people on his beat and the need to look tough to his coworkers. The signal event of the drama, the onset of the devastating Northridge earthquake, serves as a shock to all the characters and forces them to rethink their lives.

The music for Ceiling/Sky comprises 22 separate numbers, 15 of which appear on this album. The styles move over a large terrain of American vernacular music and show influences of Gospel, R&B, rock ‘n roll, blues, and Broadway, but always with the individuality of Adams’s musical voice. In drawing on the wealth of contemporary musical styles for this score, Adams cited both Gershwin’s Porgy and Bess and Bernstein’s West Side Story as models for his approach. The seven young singers, most with Broadway backgrounds, are accompanied by an eight-piece band conducted by Adams on this release. The orchestration calls for three keyboards, saxophone, clarinet and bass clarinet, electric bass, guitar, and drums.

Ceiling/Sky received its premiere on May 11, 1995, in Berkeley, California, after which it toured extensively throughout the world. With nearly 80 performances in all, Ceiling/Sky was seen in such cities as Montreal, New York, Helsinki, Paris, Hamburg, and Edinburgh, where it was hailed by London’s Sunday Telegraph as “an invigorating experience, thanks to the bursting exuberance of the brilliant cast and the vitality, power and poetry of Adams’s score.” 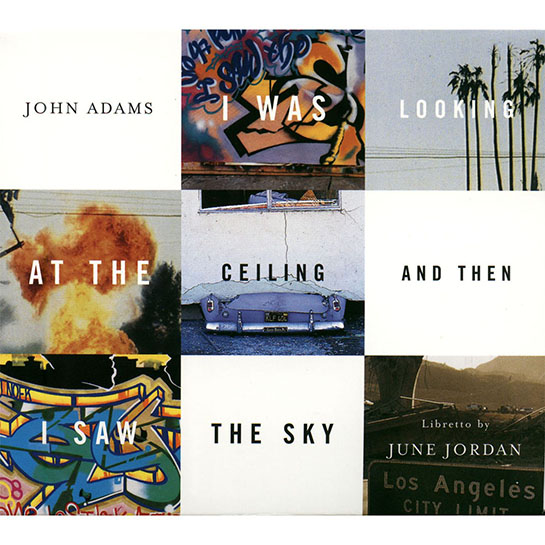