Adams's Violin Concerto was co-commissioned by the Minnesota Orchestra, the London Symphony Orchestra, and the New York City Ballet. It was described by the Boston Globe as having "the qualities of intelligence, craftsmanship, and quirkiness that have always marked the composer and his work; this time Adams also mingles virtuoso show with soul, popular appeal with the staying power that comes from intellectual interest." The premiere recording of the work, featuring violinist Gidon Kremer and the London Symphony Orchestra led by Kent Nagano, was released by Nonesuch in 1996.

Josefowicz said of the concerto in an interview with the St. Louis Post-Dispatch, "It was the piece where [Adams] first got to know me as a person and a player, when I was twenty-one. I'm now thirty-eight. When I started playing this piece, it was the confirmation of the new path that I was on, to really go down this new road with new music and with composers, because this experience was so inspiring for me." She further said, "It has a really dancelike feeling, so the violin line is often incredibly syncopated with everything else going on in the orchestra … Basically, it's supposed to make you groove."

Composer John Adams's works, spanning more than four decades, have entered the repertoire and are among the most performed of all contemporary classical music, among them Harmonielehre, Shaker Loops, Chamber Symphony, Doctor Atomic Symphony, Short Ride in a Fast Machine, and his Violin Concerto. His stage works, all in collaboration with director Peter Sellars, include Nixon in China (1987), The Death of Klinghoffer (1991), El Niño (2000), Doctor Atomic (2005), A Flowering Tree (2006), and the Passion oratorio The Gospel According to the Other Mary (2012). In November 2017, Adams's new opera Girls of the Golden West, set during the 1850s California Gold Rush, received its world premiere at San Francisco Opera. The opera's libretto, assembled by Sellars, includes original Gold Rush song lyrics, letters, journal entries, and personal memoirs from the era. This new Violin Concerto album is Nonesuch's thirtieth recording of the works on John Adams, beginning with Harmonielehre in 1986.

David Robertson celebrates his thirteenth and final season as Music Director of the St. Louis Symphony Orchestra (SLSO), which was founded in 1880 and is the second-oldest orchestra in the U.S. During his tenure, Robertson has solidified the SLSO's standing as one of the nation's most vital and innovative ensembles. He is known as a champion of contemporary composers, as evidenced by the SLSO's strong association with John Adams. Robertson and the SLSO's Nonesuch recordings include Adams's City Noir and Saxophone Concerto (2014 Grammy Award), Doctor Atomic Symphony and Guide to Strange Places, and Scheherazade.2. Robertson has frequent projects with the top orchestras and operas houses, internationally.

This recording was underwritten in part by New Music USA. 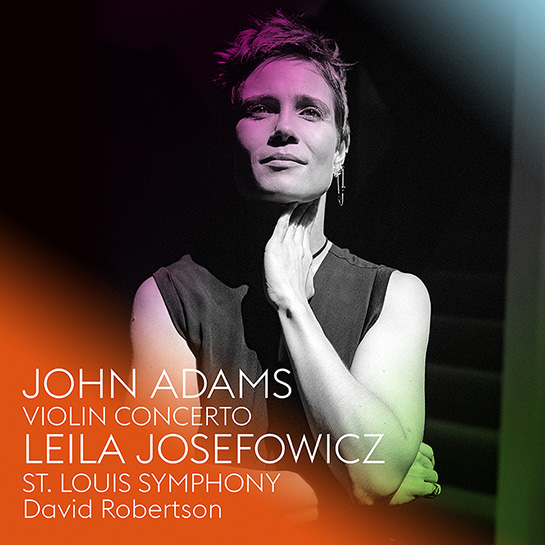