“John Adams captured the intimacy, mystery, and apocalyptic nature of the Nativity story in a thoroughly contemporary idiom," wrote the Wall Street Journal, "fusing his well-known minimalist style with a rich blend of text in English, Spanish, and Latin for an effect ultimately as timeless as the story itself.”

Bringing fresh perspectives to an ancient story, John Adams treats the theme of the Nativity in the evening-length oratorio El Niño. The work received its world premiere performance at Théâtre du Châtelet in Paris in December 2000, followed by its North American premiere in San Francisco the following January, both to great critical acclaim. Nonesuch Records released its world premiere recording in August 2001.

El Niño features a trio of world-renowned vocal soloists—Dawn Upshaw, Lorraine Hunt Lieberson, and Willard White. The cast of performers also includes Paul Hilliard’s Theatre of Voices, a full chorus (The London Voices), and the Deutsches Symphonie Orchester, conducted by Kent Nagano. The texts were compiled by Adams and his longtime collaborator Peter Sellars, who also created a stage production for the original performances.

El Niño weaves Nativity texts from diverse and sometimes surprising sources into a dramatic whole. At the core are six poems by Mexico’s two great women poets, Sor Juana Inéz de la Cruz and Rosario Castellanos. “So much of the ‘official’ narrative has traditionally been told by the Church, and presumably by men,” says Adams. “But seldom in the orthodox stories is there any awareness of the misery and pain of labor, of the uncertainty and doubt of pregnancy or of that mixture of supreme happiness and inexplicable emptiness that follows the moment of birth. All of those intense emotional dramas surrounding the birth of a child are touched on in the poetry of these Hispanic women.”

Interwoven within the narrative of El Niño are sections of little-known Gnostic Infancy Gospels. These gospels, written at roughly the same time as the New Testament Gospels, treat the story of Mary, Joseph, and Jesus with often greater shading, subtlety, and even humor than the official Biblical texts, which are also set in the piece. 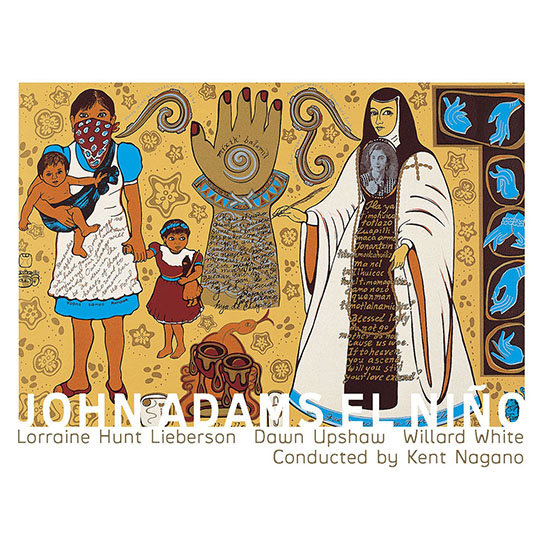