Kronos pairs work created as far back as the ninth century with modern, minimalist pieces. "The result is an alluring tapestry of old music that sounds new and new music that sounds old," says the Chicago Tribune. "The musical juxtapositions establish dialogues across the centuries. We are reminded of the striking affinities between composers who stood outside the classical tradition, then and now."

In a collection that spans nearly 1,200 years of composition, Kronos Quartet's Early Music is arguably the group’s most far-reaching musical statement of the 25-year history leading to the album's 1997 release. From ancient Greek modes of Kassia in medieval Byzantium to the pure intervals of Arvo Pärt, Kronos explores a world of sound that resonates with elemental clarity and force. Twenty works—many of which were commissioned, transcribed, or arranged for Kronos—comprise this album, which has its roots in Kronos’ earliest collaborations with composers whose emphasis on minimal, often spiritual, music hearkens back to ancient theories both acoustical and religious.

Early Music presents a wide range of responses to composition outside the genre tradition, from the sacred to the folkloric, from chant-based arrangements to traditional music of Sweden, China, and Tuva, to works written or arranged today. Created in three parts, the 70-minute album begins each section with a Kyrie by Guillaume de Machaut and arrives at its conclusion—Alfred Schnittke’s Collected Songs Where Every Verse is Filled with Grief—as if coming full circle.

“My musical development took a course similar to that of some friends and colleagues," Schnittke revealed, "across piano concerto romanticism, neoclassic academicism, and attempts at eclectic synthesis, and took cognizance also of the unavoidable proofs of masculinity in serial self-denial. Having arrived at the final station, I decided to get off the already overcrowded train. Since then, I have tried to proceed on foot.”

It was the Schnittke work that served as the inspiration for Early Music. David Harrington first heard the Concerto for Mixed Chorus in 1995, and its impact was enormous. He resolved to try to make a satisfactory arrangement of it for quartet, much as the group had done for the 40-voice motet of Thomas Tallis in the acclaimed 1990 recording Black Angels, through the layering of quartet lines.

Thus began the “search for a sound” that would arrive at Collected Songs Where Every Verse Is Filled with Grief, which Harrington viewed from the start as the album’s climax. What emerged was a series of investigations, chance encounters, and contributions by Kronos’ ever-increasing network of composers and musicians around the world that resulted in this remarkable collection.

“The contemporary artist has a deep obligation," composer Harry Partch asserted. "He is not obliged to confine himself to whatever he happened to find in his Christmas stocking.”

Having commissioned hundreds of pieces for string quartet, Kronos has long been in the habit of looking beyond the mantelpiece. But Early Music prompted the group to take on a new role—to reconstitute works of the past through a collaborative process of arranging and rehearsing, from the organum of Perotin to the Lachrymae Antiquae of John Dowland. The process also brought them together with several instrumentalist collaborators, including Wu Man, who performs the Dowland on two Chinese ruans, one an ancient instrument and the other invented in the 1950s to assume the bass part in modern Chinese orchestras.

Other guest artists on Early Music include Marja Mutru, who joins on harmonium on the Machaut motets; David Lamb, who composed his own work for himself on bagpipe performing with Kronos; Olov Johansson, who performs on the nyckelharpa, a medieval Swedish keyed violin employing a foot-long bow; and Huun-Huur Tu, the throat singers of Tuva. These collaborations also prompted the Kronos players to create a new sound for themselves as they responded to the tuning and timbral challenges represented by this far-flung and often ambiguous pitch continuum.

“Traditions in music do not begin with recent European centuries," said Partch. "The potentiality of infinitely varied melodic and harmonic subtleties is one of the ancient lost values.”

Various pairings emerge on Early Music, perhaps most prominently the inclusion of Harry Partch and John Cage, both American adventurers who pioneered new tuning systems in the 1940s which reached back to music’s ancient forms and functions. Other types of parallels occur, including Perotin and Machaut, who both revolutionized French music in the 12th and 14th centuries, respectively; two views of wedding music, as represented by Jack Body’s courtly Long-Ge, based on a Chinese theme; and the traditional Swedish Brudmarsch frå Östa; and the earliest of Early Music, written by two abbesses, the 12th century Hildegard of Bingen and the ninth century Kassia.

Recorded over a three-year period, Early Music emerged out of Kronos’ long-standing spirit of discovery of new repertoire and reexamination of traditions in music. In pushing forward, they encountered the past. In looking inward—as much of this music demands—they opened out onto a new world. 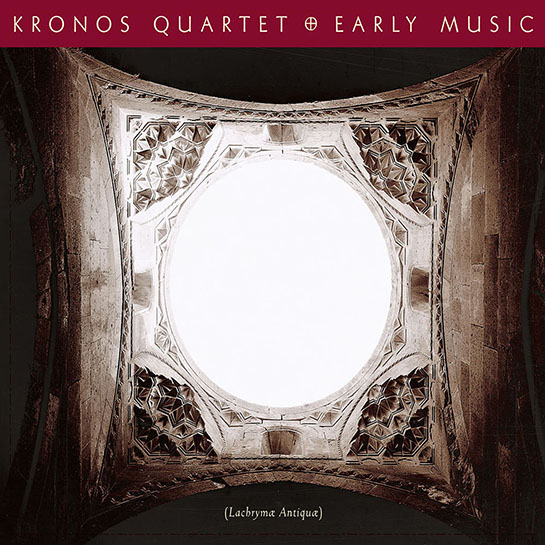