When Nonesuch Records celebrated its 50th anniversary in 2014, with festivals at the Barbican in London and the Brooklyn Academy of Music (BAM), Kronos Quartet joined forces with four labelmates—Sam Amidon, Olivia Chaney, Rhiannon Giddens, and Natalie Merchant—to perform a concert entitled Folk Songs. The group later recorded the songs, most of which are traditional with contemporary arrangements, with Doug Petty as the album's producer.

When Nonesuch Records celebrated its 50th anniversary in 2014, with festivals at London's Barbican Centre and New York's Brooklyn Academy of Music (BAM), Kronos Quartet joined forces with four labelmates—Sam Amidon, Olivia Chaney, Rhiannon Giddens, and Natalie Merchant—to perform a concert entitled Folk Songs. The group later recorded the songs, most of which are traditional with contemporary arrangements, with Doug Petty as the album's producer. Folk Songs will be released on June 9, 2017.

For more than 40 years, San Francisco's Kronos Quartet—David Harrington and John Sherba (violins), Hank Dutt (viola), and Sunny Yang (cello)—has combined a spirit of fearless exploration with a commitment to continually re-imagine the string quartet experience. In the process, Kronos has become one of the world's most celebrated and influential ensembles, performing thousands of concerts, releasing more than sixty recordings, collaborating with many of the world's most eclectic composers and performers, and commissioning more than 900 works and arrangements for string quartet. Kronos is the recipient of more than 40 awards, including the Polar Music Prize and the Avery Fisher Prize. Last season, a five-year initiative, Fifty for the Future: The Kronos Learning Repertoire, began commissioning new works designed to train students and emerging professionals; the pieces are distributed online for free. Kronos has had a close relationship with Nonesuch since 1985, when the group recorded Philip Glass' soundtrack to Mishima. Nonesuch has since released forty-seven albums by Kronos, including Pieces of Africa (1992), a showcase of African-born composers; Nuevo (2002), a celebration of Mexican culture; and the 2004 Grammy winner, Alban Berg's Lyric Suite, featuring Dawn Upshaw—as well as motion picture soundtracks such as Requiem for a Dream and albums dedicated to composers including Glass, Terry Riley, Steve Reich, Franghiz Ali-Zadeh, Henryk Gorecki, and Astor Piazzolla, among others.

Nonesuch released Sam Amidon's label debut, Bright Sunny South, in 2013, followed by Lily-O the next year. The Vermont-born and -raised, London-based Amidon is known for his reworking of traditional melodies into a new form. In addition to country ballads and shape-note hymns, his work features interpretations of traditional and contemporary songs. Previous solo albums include I See the Sign, But This Chicken Proved Falsehearted, and All Is Well. Amidon has also collaborated on performance pieces with Nico Muhly, toured as part of Thomas Bartlett's group Doveman, collaborated with Beth Orton, and embarked on a series of live shows with the guitarist Bill Frisell. His new album, The Following Mountain, will be released on Nonesuch on May 16, 2017.

Classically-trained singer / pianist Olivia Chaney graduated from England's Royal Academy of Music before teaching herself guitar and Indian harmonium, delving back to the inspiration behind the British folk revivalists. She has since built a loyal and growing following as a songwriter and interpreter, both in the UK and internationally, through her acclaimed and eclectic live performances and recorded works. Over the past few years, Olivia has collaborated and shared the stage with a diverse range of artists including Robert Plant, Alasdair Roberts, The Decemberists, Zero 7, Kronos Quartet, and The Labèque Sisters. In 2013, she self-released an eponymous EP, which was followed by her critically-acclaimed 2015 Nonesuch debut, The Longest River. This sophomore release, which the Guardian hailed as "an enchanting and stately creation", was noted in a number of Best of 2015 lists (Uncut, Mojo, PopMatters, and more);while the Independent featured it in their Top 5 Albums of the Year, calling it "a landmark release."

Rhiannon Giddens, who had previously won accolades and a Grammy Award as a founding member of the Carolina Chocolate Drops, made her solo debut with Tomorrow Is My Turn, which was one 2015's most highly praised albums. The album was Grammy nominated, and Giddens received the BBC Radio 2 Folk Award for Singer of the Year. Giddens, who studied opera at Oberlin, made her acting debut with a recurring role on the CMT television drama Nashville this season. Earlier this year she won the Steve Martin Prize for Excellence in Bluegrass and Banjo. Giddens' second solo album, Freedom Highway, was released in February 2017 to critical acclaim: Pitchfork said, "Giddens has emerged as a peerless voice of roots-minded music as a solo artist on her new album."

Natalie Merchant's career began in 1981 when, as a college student, she joined the seminal alternative rock band 10,000 Maniacs. As lead vocalist, lyricist, and sometimes pianist, Merchant released six critically acclaimed studio albums with the band, including the platinum-certified In My Tribe (1987), Blind Man's Zoo (1989), Our Time in Eden (1992), and MTV Unplugged (1993). She left the group in 1993, and in 1995 released her multi-platinum solo debut, Tigerlily, followed by the platinum Ophelia (1998), Motherland (2001), and The House Carpenter's Daughter (2003). In 2010, Merchant made her Nonesuch debut with Leave Your Sleep, for which she set 19th and 20th-century children's poetry to music. In 2014, Nonesuch released Natalie Merchant, her first album of entirely original songs in thirteen years. That was followed by the 2016 reimagining of Tigerlily, Paradise Is There: The New Tigerlily Recordings, which featured new recordings of the beloved songs as they have evolved over two decades of live performance. Natalie Merchant will tour the US this summer, performing songs from across her entire career, with Natalie Merchant: 3 Decades of Song in anticipation of a forthcoming career retrospective boxed set on Nonesuch. 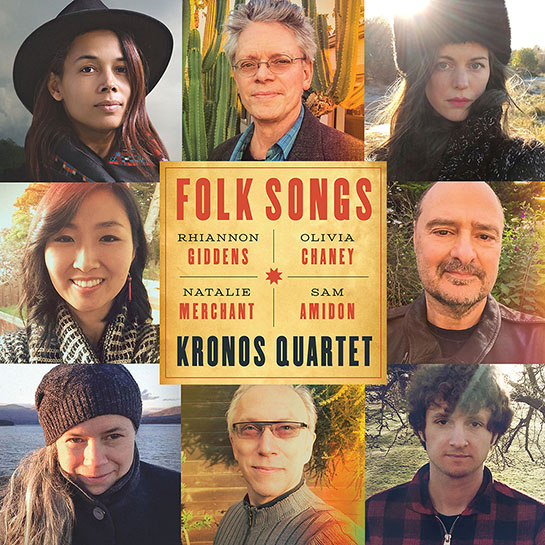