Requiem for a Dream [Soundtrack]

This performance of Clint Mansell’s score is as haunting and harrowing as Darren Aronofsky’s film, which the New York Times called “a knockout.” A suite derived from the score has become a popular addition to the Kronos live repertoire.

In his second collaboration with Darren Aronofsky, acclaimed director of the 1997 film pi, composer CLINT MANSELL has written original music for Aronofsky’s current project, Requiem for a Dream. The film, released through Artisan Entertainment, stars Academy Award-winner Ellen Burstyn, Jared Leto, Jennifer Connelly and Marlon Wayans. Mansell’s new score includes performances by Kronos Quartet, with arrangements by David Lang, one of the founders of Bang on a Can.

British composer/musician Clint Mansell, a former front man and founding member of the pioneering English rock/hip hop band Pop Will Eat Itself, composed the mostly-electronic score for Requiem for a Dream this year, three years since completing new music for Darren Aronofsky’s critically acclaimed feature debut p. Since 1997 Mansell has produced one record, has completed several remixes, and is currently writing and recording the score for the upcoming film Knockaround Guys, starring John Malkovich, Dennis Hopper and Vin Diesel. He is also working on his debut solo album.

Mansell’s score for Requiem for a Dream serves to intensify the wide range of emotions that permeate the film. Mansell, in commenting on his work with director Aronofsky and Kronos Quartet said, “In a homogenized world of brand names and mass production, a world where art is always at odds with commerce, it is unbelievably gratifying to work with artists such as Darren Aronofsky and the Kronos Quartet, whose desire to go beyond the norm, beyond the expected, is not tempered by the desire to be commercially palatable.”

Requiem for a Dream is adapted from the 1978 novel by celebrated author Hubert Selby, Jr. (Last Exit to Brooklyn), who also wrote the screenplay with Aronofsky. Set on the rusted mean streets of Coney Island, Brooklyn, Requiem for a Dream tells the parallel stories of four people pursuing their dreams of better lives. Sara Goldfarb (Ellen Burstyn) is a lonely widow who is revitalized by the prospect of appearing on television as a game show contestant, while her son Harry (Jared Leto), his girlfriend Marion (Jennifer Connelly), and his friend Tyrone (Marlon Wayans) have devised an illicit shortcut to wealth and ease. Lulled by early successes, the characters convince themselves that unforeseen setbacks are only temporary, ignoring their deteriorating circumstances and clinging to the delusions that are slowly destroying their lives. In denying this reality until it is too late, Sara, Harry, Marion and Tyrone are faced with their worst nightmare. Requiem for a Dream is presented by Artisan Entertainment and Thousand Words, and is distributed in the US by Artisan Entertainment.

Since its inception in 1973 Kronos Quartet has emerged as a leading voice for new music, commissioning more than 400 new works from the near and far corners of the globe, and releasing more than 25 records through an exclusive recording agreement with Nonesuch Records. Combining a unique musical vision with a fearless dedication to experimentation, Kronos has assembled a body of work that is unparalleled in its range and diversity. Kronos continues to capture the attention of audiences worldwide, with an extensive international touring schedule of more than 100 concerts each year.

All music composed by Clint Mansell, except tracks 16 and 24 by Brian Emrich and Theodore Birkey 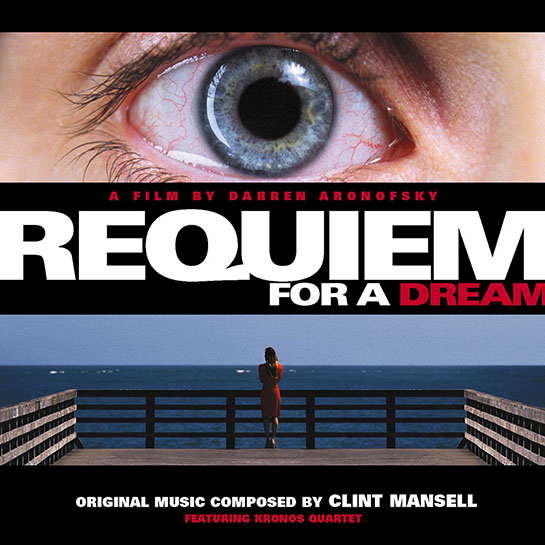