Kronos traces the flow of music from Northeastern Europe to the Mediterranean to Asia and back, using contemporary work to illustrate ancient traditions. Billboard declares, “Kronos Quartet continues to amaze with its conceptual acuity and cultural breadth.”

Much of the color and variety that has infused the long career of Kronos Quartet is the result of collaborations with composers from more than 50 countries. Unquestionably the most globally minded ensemble of its kind, the Quartet is familiar with an astonishing number of musical traditions and master players. These explorations have resulted in some of their most striking projects, particularly Pieces of Africa, which achieved the unprecedented distinction of being # 1 on the World and Classical charts simultaneously.

Kronos Caravan is inspired by that part of the world once known as “Pannonia”—the territory that connects northeastern Europe with the Mediterranean and the Orient. This crossroads of peoples and cultures is the starting point for a collection of arrangements and compositions that includes Portuguese fados; an Indian film theme; a Romanian Gypsy theme, featuring Taraf de Haïdouks; tunes from Iran, Hungary, and the Arab world; and a ritual elegy by composer Terry Riley. Also included is a version of the Lebanese-derived Misirlou Twist by Richard Monsour (better known as Dick Dale) and a Mexican piece written originally for Café Tacuba.

The natural energy and verve that Kronos brings to this material is enhanced by an assortment of superior instrumentalists including Zakir Hussain, Ali Jihad Racy, Kayhan Kalhor, and others.

One unifying force that serves to bring some of these seemingly disparate musical elements together is the work of Argentinean composer Osvaldo Golijov, who arranged much of the material on this album. Golijov, whom the New York Times describes as “a musical alchemist (who) conjures up new worlds,” has enjoyed a longstanding relationship with Kronos, highlighted by recordings of two of his works for Nonesuch: K’vakarat (1994) for Night Prayers, and The Dreams and Prayers of Isaac the Blind (1995), released as a single in 1997.

Golijov’s search for a meaningful integration of widely different musical sources has lead to work with a diverse group of performers. In commenting on Golijov’s involvement with Kronos Caravan, David Harrington said, “Osvaldo Golijov has the remarkable ability to bring musicians together through his work. We needed a voice—a compositional voice—that provided coherence. I think he is the perfect collaborator in an idea like this because he instinctively understands the relationship between Terry Riley’s piece and Misirlou Twist. He is Kronos’s Gil Evans.” 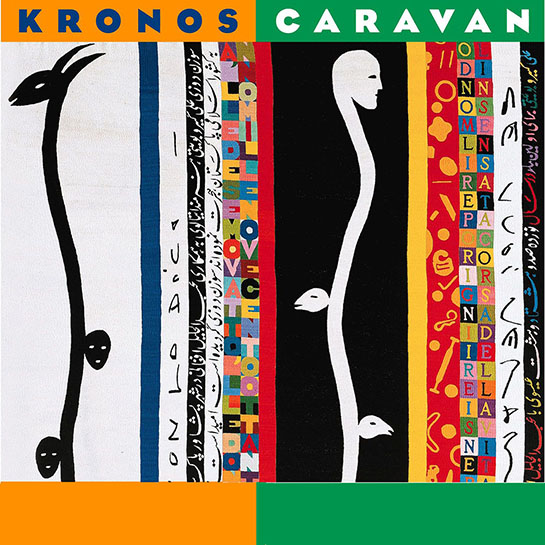