Latvian composer Peteris Vasks’s specially commissioned five-movement piece reflects upon the passing 20th century. “There has been so much bloodshed and destruction,” Vasks explains, “and yet love’s power and idealism have helped to keep the world in balance.”

Nonesuch Records announces the August 19, 2003 release of three new Kronos Quartet CD singles, each of which features a piece from an international trio of influential composers. The ensemble, which is celebrating its 30th anniversary this season, and the recordings are emblematic of the repertoire it has performed over the last three decades. The recording of Austrian Alban Berg’s Lyric Suite—a major 20th century work that the quartet has performed numerous times over the years—features Dawn Upshaw singing the final movement’s rarely recorded vocal line. Ben Johnston’s arrangement of American composer Harry Partch’s U.S. Highball: A Musical Account of Slim’s Transcontinental Hobo Trip—created from the composer’s own travel recollections—features singer David Barron and is an example of the group’s dedication to re-interpreting existing works. The third single features a piece created for and premiered by Kronos—Latvian composer Peteris Vasks’ Fourth String Quartet, which somberly reflects on the passing of the last century; introducing new works is crucial to the mission of the quartet.

Since 1991, Kronos has released seven CD “singles”—each containing one piece of music issued at a special price—featuring works by Astor Piazzolla, Kevin Volans, Tan Dun, Osvaldo Golijov, Witold Lutoslavski, Bob Ostertag, Franz Liszt, and Alban Berg. “The idea behind the singles format,” says David Harrington, Kronos violinist and artistic director, “is that occasionally, we find a work that we feel is best appreciated when heard by itself. The listening experience you have with a recording at home is so different from the one you might have in a concert. We chose these three works with that in mind.”

In 1925, the long-married Alban Berg experienced a turbulent, clandestine eight-day love affair with Hanna Fuchs-Robettin, who also was married. As divorce was impossible, the composer sought solace in the creation of a new string quartet—the six-movement Lyric Suite. The piece, completed in 1926, traces the tumultuous narrative of the relationship and includes several private symbols of the affair, including the ciphered initials of the two lovers and thematically resonant quotations from Wagner and Zemlinsky. The meaning of those references, along with the romance, remained hidden from the public until 1977, when American composer and scholar George Perle discovered a specially annotated copy of the score that had been sent from “Alban” to “Hanna.” This score included a previously unknown close to the suite, a setting of Baudelaire’s poem “De profundis clamavi” for string quartet and soprano, which Berg deleted from his final version—most likely to avoid gossip and speculation. The Nonesuch recording, which features Dawn Upshaw, is among the few to restore Berg’s vocal part as reconstructed by Perle. Kronos first performed the piece with soprano nearly 25 years ago.

In September 1941, with $3.50 in his pocket, Harry Partch left his home in California and joined the growing American hobo subculture of young men traveling the country in search of work and adventure. Partch traveled to Chicago—mostly by freight train—jotting down snippets of conversations, graffiti, station names, and various reflections in his notebook. These recollections became the basis of U.S. Highball: A Musical Account of Slim’s Transcontinental Hobo Trip, which Partch described as “the most creative piece of work I have ever done.” The work, a musical stream-of-consciousness, includes quotes from the hoboes such as “Hey, don’t sleep with your head against the end of the car! You’ll get your neck broke when she jerks!”, complete with musical duplication of the speakers’ pitches—thanks to Partch’s meticulous note taking. Kronos’ recording, which features singer David Barron, does not use any of Partch’s three versions of the piece, but rather an arrangement for voice and string quartet made for Kronos in 1997 by Ben Johnston, a composer who studied and worked with Partch. (Kronos also has performed Johnston’s music frequently).

Peteris Vasks’ Fourth String Quartet, commissioned for the Kronos Quartet by Mrs. Ralph I. Dorfman, was premiered in 2000 in Paris. The composer said of the work, “While working on the score, I often reflected upon the passing century. My reflections were somber ones. There has been so much bloodshed and destruction, and yet love’s power and idealism have helped to keep the world in balance. I wanted to speak of these things in my new quartet, not from the sidelines but with direct emotion and sensitivity.” The work consists of five movements—variously meditative, strident, and restless—and includes Latvian folk songs. Vasks was born in 1946 in Latvia. He studied double bass at the Lithuanian Academy of Music, where he became familiar with the music of the Polish avant-garde. After two years of service in the Soviet Army, he studied composition with Valentius Utkins at the Latvian Academy of Music. Vasks was a member of various ensembles from 1963 to 1974. Since then he has concentrated on composing. His compositions have been recorded by Gidon Kremer and the Hilliard Ensemble, among others, and have been used by choreographer Bill T. Jones and the Nederlands Dance Theatre. Vasks currently lives in Riga.

All music composed by Peteris Vasks 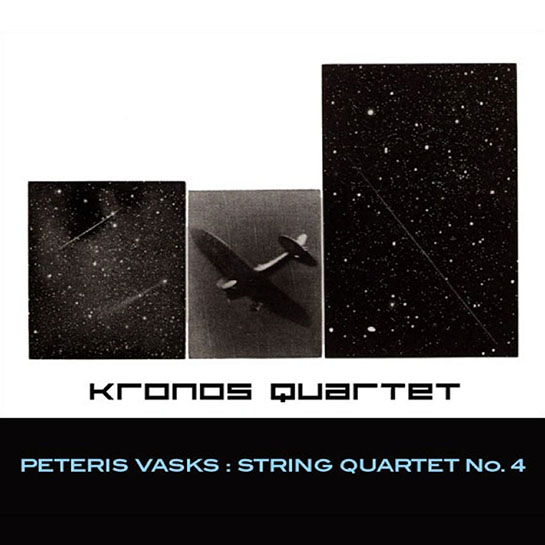