Kronos performs Terry Riley’s elegies to lost friends. The title piece, composed in memory of David Harrington's son Adam, is "a deeply personal statement," says Riley, "a way of coming to terms with loss, a step in coping with grief." A similarly commemorative spirit lies behind The Philosopher's Hand, a solo piano piece composed spontaneously in memory of Riley's teacher Pandit Pran Nath, and featured on this recording in a performance by the composer.

“For a year David would come up to me in the hall and say, I hear string quartets in your music…Then he simply scheduled a piece with my name on it. So I made a tentative stab at writing something, and invited Kronos up to the ranch to try it out.” —Terry Riley, 1978

More than two decades since their first meeting, during a residency at Mills College in Oakland in 1978, Kronos Quartet and Terry Riley continue to share in what has become a long and fruitful collaboration. It can be said that Riley’s newest work for Kronos, Requiem for Adam, grew out of David Harrington’s urging, more than two decades ago, that Riley explore written notation in his compositions, which he had abandoned in the 1960s.

The first piece Riley wrote for Kronos, G Song, became the basis for the major extended work Salome Dances for Peace. Cadenza on the Night Plain, commissioned by Kronos, contains a cadenza for each player that reflects some aspects of his or her personality. Kronos, who set out to obtain one quartet back in 1978, ended up finding in this collaboration a spirit and rehearsal method that serves as the basis of their ongoing work with composers.

Requiem for Adam, premiered in Amsterdam on June 28, 1999, is the last of the Three Requiem Quartets that Riley has written in recent years to commemorate the deaths of people close to the members of Kronos. (The first two works are Mario in Cielo and Lacyrmosa (Remembering Kevin). Requiem for Adam was composed in memory of Adam Harrington, son of David and Regan Harrington, who died while walking with his family on Mt. Diablo, California, on April 16, 1995, when a blood clot in his coronary artery caused his heart to fail. In Riley’s words the work is “a deeply personal statement, a way of coming to terms with loss, a step in coping with grief.”

A similarly commemorative spirit lies behind The Philosopher’s Hand, a solo piano piece composed spontaneously in memory of Riley’s teacher Pandit Pran Nath, and featured on this recording in a performance by the composer.

Harrington has said that working with Riley totally transformed Kronos’ sound. Riley’s immersion throughout the 1970s in the study of the North Indian raga tradition, and specifically the work of the celebrated vocalist Pandit Pran Nath, inspired Kronos to reconsider their conditioned attitudes to basic performance issues. Riley had ideas about intonation and expression through bowing that pushed the Kronos players into a new realm of experimentation. “He didn’t want vibrato, but he wanted it expressive,” says Harrington. “It was very hard for us as a group, but eventually we arrived at a sound that was different from anything we had ever done before. There was a magical moment when the bow, rather than vibrato, became the major expressor of color. I think of composers as teachers, who can provide us with first-hand information in exploring the mysteries of their pieces.”

Similarly, Riley’s work with Kronos can be seen as one of the turning points in his compositional career. Kronos inspired Riley to move beyond the minimalism of the 1960s and 1970s into a compositional style that was more open to other musical traditions and historical eras that his earlier, more austere style, was not. In Riley’s own words, “I try to deeply assimilate all the music I’m drawn to, to synthesize it within myself.”

Requiem for Adam was commissioned for the Kronos Quartet by Sydney and Frances Lewis, Margaret Lyon, and Jim and Jeanne Newman. 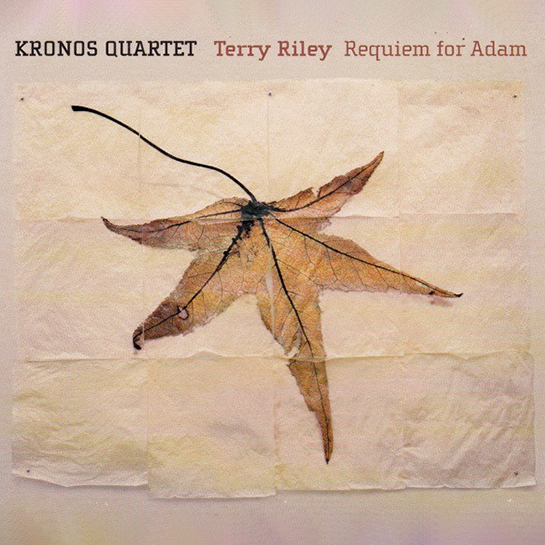