Kronos plays works created between 1966 and 1989 by the former Soviet Union’s leading composer, Alfred Schnittke. The group, says the New York Times, “has delivered a performance in which every phrase is filled with profound and resonant meaning.”

Widely regarded as the Soviet Union’s leading composer of the late 20th century, Alfred Schnittke (1934–98) achieved a reputation that came comparatively late in life but ultimately arrived with awards, honors, retrospectives, and major festivals worldwide. Despite years of governmental suppression, he was able to produce an enormous body of work. Schnittke composed symphonies, concerted works, concerti grossi, chamber music, film and ballet scores, as well as vocal works including opera.

Within this oeuvre, his string quartet music occupies a significant place, with six works in the idiom produced between 1966 and 1989. These compositions are gathered together for the first time on a two-CD set from Nonesuch performed by one of the composer’s most vigorous advocates, Kronos Quartet.

Defiantly nonconformist, his First Quartet is a serial work, and something of an avant-garde manifesto, while the Second—written 14 years later, and in a completely different style—is an expression of love for his Russian homeland, its vast landscape and its people, with allusions to ancient chants. The Canon is an homage to one of Schnittke’s favorite composers, while the Third Quartet—a product of his hallmark polystylistc period—contains reminiscences of Beethoven, Orlando di Lasso, Shostakovich, and Wagner. The Fourth Quartet is a fresh approach to the style of the second Viennese school, one of his major influences. The “Collected Songs” is an arrangement of a portion of the composer’s Choir Concerto: a solemn and moving work that has been compared to Barber Adagio.

Born in 1934 in Engels, Schnittke completed his musical education in 1961 and joined the Union of Composers, and was appointed an instructor at the Moscow Conservatory in 1962, a post he held until 1972, after which he supported himself chiefly as a composer of film scores. In 1990, he moved to Hamburg, where he maintained dual German/Russian citizenship. Despite a series of strokes since 1985, his creative productivity remained undiminished through the early 1990s, until a more debilitating stroke in 1994 eventually forced him to stop composing. Schnittke passed away in 1998.

Art direction and design by Frank Olinsky
Photo of Alfred Schnittke (Berlin, May 1990) by Betty Freeman 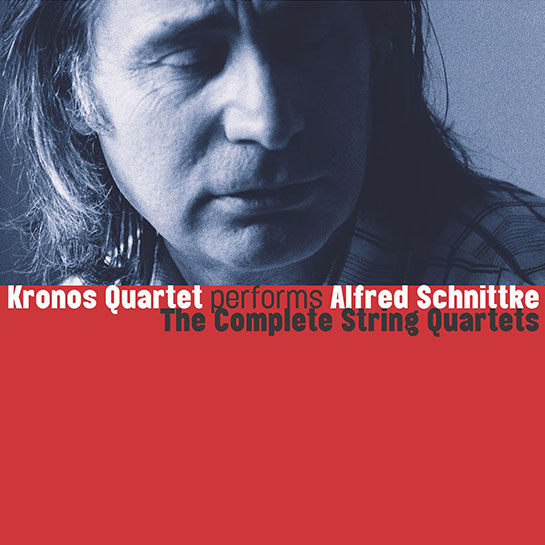