Shara Nova Shares the Story Behind 'The Blue Hour'

"Finally bringing this recording to your ears, after so many years ... is a tremendous exhale and a collective accomplishment made possible by many small and many giant acts of generosity," Shara Nova writes in a new essay about the creation of The Blue Hour, a song cycle collaboration among composers Rachel Grimes, Angélica Negrón, Caroline Shaw, Sarah Kirkland Snider, and Nova, who performs the piece with the commissioning chamber orchestra A Far Cry on the album out this Friday.

The Blue Hour, a song cycle collaboration among composers Rachel Grimes, Angélica Negrón, Shara Nova, Caroline Shaw, and Sarah Kirkland Snider, is out this Friday, October 14, on New Amsterdam / Nonesuch Records. The piece was commissioned and performed by the chamber orchestra A Far Cry, who are joined by singer Shara Nova. Here, Nova shares the story behind the piece and its creation.

In August of 2015 the string orchestra A Far Cry reached out to me to ask if I would join a composer collaboration project. When looking at the list of names Rachel Grimes, Angélica Negrón, Caroline Shaw, and Sarah Kirkland Snider, of course I said yes. We planned a weekend together at Sarah’s house, and the five of us composers sat around the table pouring over poetry and finally deciding on a poem by Carolyn Forché called “On Earth” nestled in a book of her poems entitled Blue Hour.

Flashes of images from an entire life become instantaneously present at the time of death. “Here, amidst images, dim images, of solemnity or peace, of glory or of terror, the pilgrim pursues (her) course alone, and is lost to our eye,” wrote George Burgess.

We were also attracted to the poem’s form, an abecedarian structure, meaning that every line is organized according to the alphabet. For example:

a barnloft of horse dreams, with basin and bedclothes
a bit of polished quiet from a locked church
a black coat in smoke

The structure of the poem was something we wanted to retain, but we didn’t feel we could set the lengthy work in whole, so we took several hours that first weekend together finding our favorite lines and then stitching them together to see what resulted basing our choices simply on our individual tastes. We had missed a few letters in the alphabet, so landing on our final selections took a few more months. (Thank you to our dramaturg, Joseph Cermatori!). Then members of A Far Cry joined us around the table for dinner, and we knew something significant had begun.

Seven years. It has taken seven years from idea to birth. Many of those years were added because COVID-19 simply made large scale recording projects like this impossible. The amount of labor and effort that it has taken from so very many people to bring this into being is like nothing else I have ever done. We were also working as democratically as we could, both the group mind of A Far Cry and the five composers making decisions together, so that value meant that all choices had to run through a longer process. Finally bringing this recording to your ears, after so many years of what often felt like clawing inch by inch to this moment, is a tremendous exhale and a collective accomplishment made possible by many small and many giant acts of generosity. 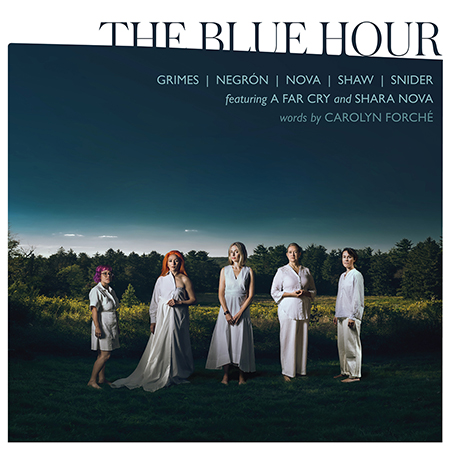 For me, to embody this work as a singer is a journey of stark juxtapositions, to see beauty, to experience heartbreak and sorrow, to be playful, to name the horror of war, to delight in the texture of a fabric. It is also a spiritual practice to sing an experience of my own death. To be fully alive, vibrant and to release a last breath. What becomes so evident to me is the great value in every human life and the wondrous multitudes contained in every being. You the listener are that wondrous too.

X By submitting my information, I agree to receive personalized updates and marketing messages about Nonesuch based on my information, interests, activities, website visits and device data and in accordance with the Privacy Policy. I understand that I can opt-out at any time by emailing privacypolicy@wmg.com.

Customize your notifications for tour dates near your hometown, birthday wishes, or special discounts in our online store!